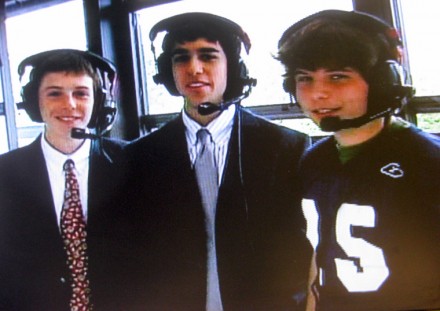 On Sept. 26, the homecoming football game was broadcasted over Channel 78 by the newly formed Staples Television Network (STN) with audio from WWPT.

Radio hosts and vice-presidents for STN, Eric Gallanty ’11 and DJ Sixsmith ’11, called the game with Mike Nussbaum ’11, a sideline reporter, and Bobby Shea ’11, responsible for stats.

Brandon Edelson ’11, the STN president, came up with the idea to form STN at the end of the 08-09 school year.

“Last year I was on Good Morning Staples… [and] was given the task to create graphics for [a band concert] show,” Edelson said. “I came across a road bump when trying to figure out how to represent the shows… so I thought why not have these [band] shows be part of a larger station.”

After a bit of recruiting by Edelson, Gallanty and Sixsmith agreed to broadcast the football game live on Channel 78, the first test of the STN.

“I was so excited that I would have the opportunity to be broadcasting my favorite sports on live TV,” Sixsmith said.

“On TV there is video to back you up, so on radio the play-by-play is more important,” Gallanty said. “[But] on TV it is more color commentary and the play-by-play doesn’t need to be as detailed.”

To prepare for the first live TV broadcast, Gallanty read articles on past games and interviewed head football Coach Petroccio, while Sixsmith “researched throughout the week, reading game recaps, blogs and team previews.”

The result was successful, explains Gallanty.

“I think it went really well because, unlike NFL’s broadcasts with commercial breaks, we have to go from 12:45-4 p.m. with nonstop broadcasting,” Gallanty said.

“I thought the first broadcast was a real success, as I had a great time being in front of the camera,” Sixsmith said. “[And] I have certainly heard a lot of positive feedback… for the impressive suits that Gallanty and I were rocking.”

For Edelson, the homecoming broadcast was just the first of many televised events to be covered by STN.

“We have camera inputs and hope to get a wireless camera that will enable us to cover practically every sport,” Edelson said. “However, STN Sports is only a fraction of what we wish to achieve.”

In the future, he explains, STN hopes to develop local news shows and even an economic show.