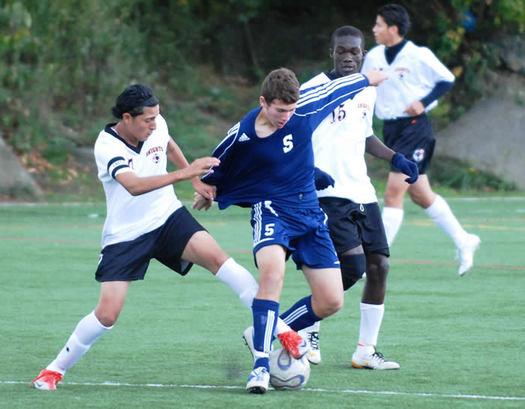 The Staples soccer team improved their record to 7-0 last week after beating Fairfield Ludlowe 4-0 and Stamford 3-1. The Wreckers remain undefeated while they continue to fire on all cylinders.

Following four consecutive road games, fans packed the stands on the hill to watch the second home contest of the year against 3-0-2 Ludlowe. The Wreckers stepped up to the challenge out shooting the Falcons 19-3, and getting goals from Gudis ‘11, McNair ‘10, and Reiter ‘10.

The Wreckers got on the board quickly when Greg Gudis snuck a touch shot past the Ludlowe goalie giving the Wreckers the early advantage. For the majority of the first half Staples failed to play with fluency and rhythm putting pressure on the defense. The two squads looked evenly matched.

Although they played without urgency in the first half, Staples came out firing in the second half, playing fast and hard, getting to every ball, and playing with more overall intensity.

The Wreckers looked in control as Gudis scored for the second time in the game off a perfect pass from Captain Mike White ’10. Staples did not let up and in the 59th minute Alan Reiter ’10 scored his first goal of the season putting the Wreckers up 4-0.

“The ball was served into the box, so I took the touch down and struck it well in the bottom left corner,” said Reiter.

Two days later the Staples soccer team hit the road once again, taking the field against the Stamford Black Knights.

Stamford took the lead early after a miscommunication left a lone Black Knight on the weak side of the penalty box. The ball found his feet and he buried a low liner into the bottom right.

Staples, though, lead with 23-5 in shots and had seven corner kicks to Stamford’s one.

The Wreckers went into halftime down a goal for the first time this season. They would not be denied, however, and came out with renewed intensity as in the Darien game with three goals in just a matter of minutes.

“Gallagher got a short pass and we made eye contact, I busted through the hole and finished with my head,” said Fitzgerald.

The Staples soccer team, with wins over the undefeated Ludlowe and Stamford, qualify for the state tournament for the 50th time in 51 years. But the Wreckers don’t plan on letting up and are already focused on the next game.

“It’s a privilege we have earned to qualify, however the difficulties of the season have yet to come with our big game against Norwalk next week,” said quad captain Andrew McNair.