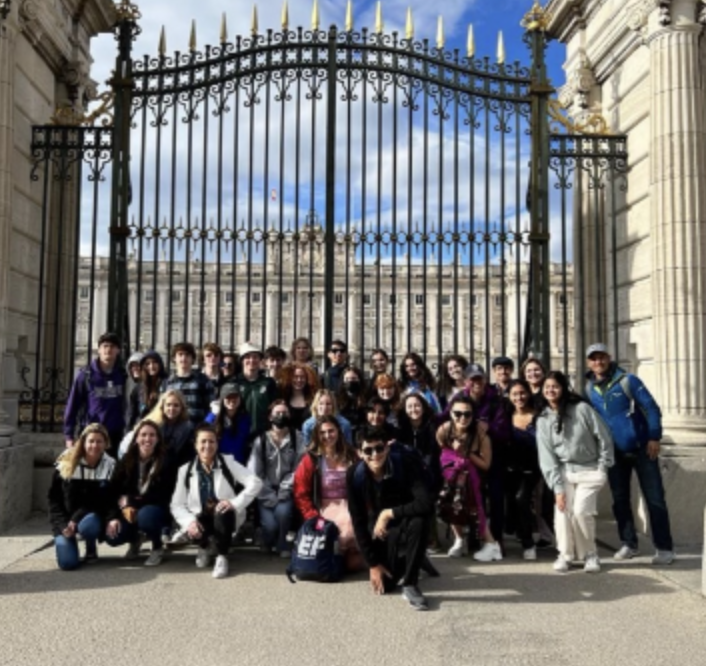 The Staples group of students stand in front of the gate to the Royal Palace in Madrid.

When you think of spring break, family trips to tropical islands or college tours immediately come to mind. But for this spring break, a group of Staples students traveled throughout Spain on a school-sponsored field trip.

“We visited five cities and went sightseeing in all of them,” Jack Whittle ’23 said. “We had a cooking class for Spanish dishes like gazpacho and paella, went through two cathedrals and went on a bike tour through Barcelona.”

The trip provided students with the opportunity to immerse themselves into the Spanish culture in a way that is not possible to teach just inside the classroom.

“At restaurants, ice cream stores and clothing stores, I tried talking to store clerks in Spanish which was somewhat a challenge but also very fun,” Christina Meehan ’23 said.

Students were able to travel across the globe with their friends. They learned about Spanish culture and history from within museums and restaurants, rather than sitting behind a desk watching a powerpoint presentation on the smartboard.

“One memorable experience was when Jack Whittle and I talked with an old Spanish farmer in Sevilla,” Ryland Noorily ’23 said, “which will stick with me for a while.”

This trip was a standout to many students and a spring break like none other before.

“We went to a women’s fútball [soccer] game in Barcelona which was really cool because it was an event where not many tourists were, so we were surrounded by many locals,” Meehan said. “I remember waving the Barcelona fútball team flag and feeling like I was a part of something bigger than myself which was an irreplaceable experience.”