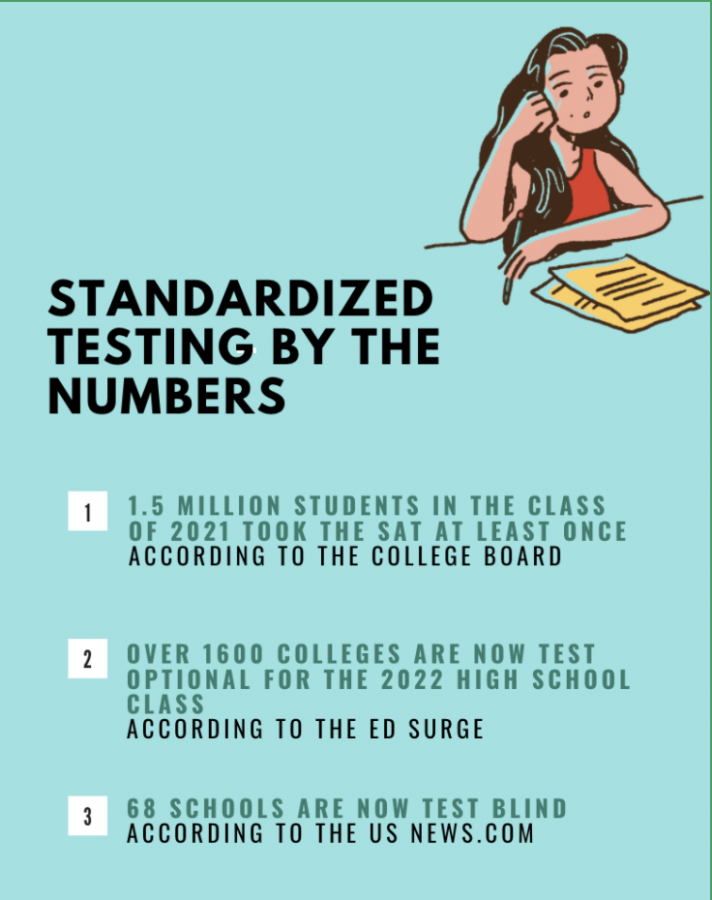 While many colleges are allowing applicants to choose to submit their test scores, stress for the junior class persists.

As you walk into school, you are immediately met with the sight of big-name, competitive colleges displayed on sweatshirts, hats and t-shirts. Whispers throughout the hallways between friends reveal conversations of when the next SAT is scheduled. Pressure mounts as you reflect back on your own college admissions plan. Sound familiar?

As the class of 2023 begins their journey of college applications, stress related to standardized tests has persisted despite many schools’ shift to being test-optional.

Many students, including Tanvi Gorre ’23, are in the midst of studying for their standardized tests. Gorre believes that the prevalent idea that a single score can dictate one’s path to college is a significant contributor to her stress.

“Standardized tests are a common topic among my friends and I believe it has to do with the value we put on standardized tests,” Gorre said. “There is always a looming fear that you will never get the score you want. We somehow believe that a few digits are going to change the trajectory of our lives.”

Mallika Subramanian ’23, who has finished testing for the ACT, feels that the competitive nature of the college process in Westport furthered her mania during the preparation.

“Standardized testing has become a large statistic in Westport, and a lot of people have put a lot more importance on it than I believe it is worth,” Subramanian said. “Competitiveness in Westport society has definitely increased as a result of this kind of testing because it has become another way to compare one kid to another, and I don’t believe that this sort of competition is helpful to anyone.”

While the prospect of test-optional schools—colleges that allow students the choice to submit test scores—may seem to alleviate stress, both Subramanian and Gorre agree that the option has never crossed their minds.

“Because I’m coming from Westport, [submitting test optional] seemed less optional,” Subramanian said. “If I was coming from somewhere else, I may have felt less stressed, but here it feels like you have to take it so that college can compare you to others around you.”

Competitiveness in Westport, Subramanian claims, contributes to unresolved stress. Many students are unable to find a balance between test preparation and enjoying their junior year.

“The truth of the matter is that a lot of people in our school ignore the stress they are under. I wouldn’t say I completely ignore the stress that comes with the SAT but I don’t do much to combat it,” Gorre said. “I think as a community we do not handle stress with the attention and the care we should since we are so focused on results.”

William Plunkett, the Director of the Guidance Department, cites the Summit Educational Group as an important organization that helps the guidance department and families manage the overwhelming college admissions process. The group hosts presentations for families and works with the department to fill guidance counselors in on pertinent admission trends and information.

Additionally, Plunkett reminds students of the importance of being wise consumers when starting the process. Plunkett believes that seeking out resources and test plans that adhere to one’s values are especially beneficial in the long run.

“I think it’s important to work hard and try your best to prepare in some way, but we certainly don’t want to see students having their life taken over by preparation of these tests,” Plunkett said. “It’s just not worth it.”