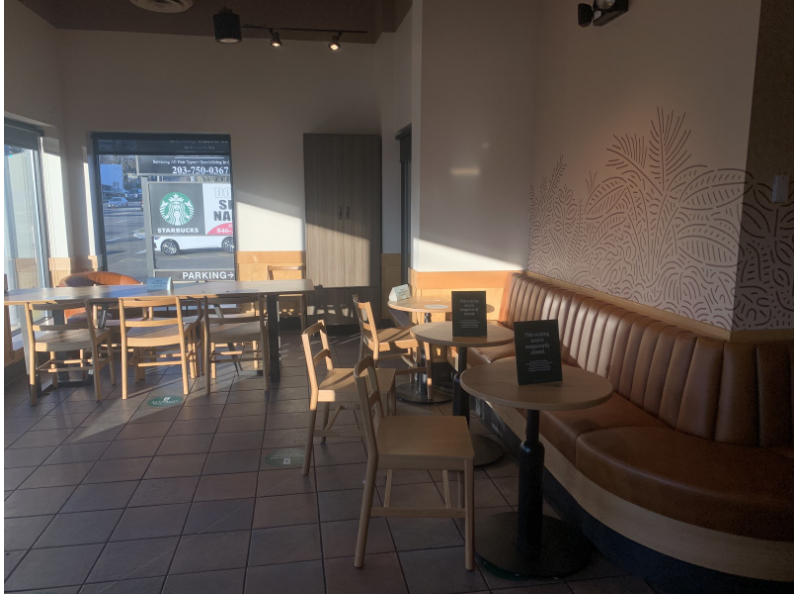 Starbucks in Norwalk, Connecticut has reopened its seating area for customers. Spaced out tables and wearing a mask when not eating are protocols that must be followed to ensure safety.

On March 19, it was declared that Connecticut would return to full capacity. After a year in the pandemic, the world has started to slowly return to normalcy: restaurants, libraries, gyms, offices, museums and other recreational practices will be able to obtain full capacity.

“Connecticut has made tremendous strides to combat this pandemic, and we don’t want to lose the progress that we’ve made,” Governor Ned Lamont said in Connecticut’s Official State Website.

Despite the remarkable improvements that Connecticut has made during this pandemic, certain protocols will continue to remain the same. This includes masks being required, a curfew of 11 p.m. for restaurants and 50% capacity at indoor movie theaters.

The accomplishment of reaching maximum capacity for many businesses in Connecticut brings hopefulness to many students. In addition, as more vaccines are being distributed, students are becoming more comfortable in their surroundings.

“Now that vaccines are being distributed I do think that people will start to feel more comfortable all around, including eating inside, which will bring a sense of normalcy,” Madison Lebowitz ’22 said.

Contrary to this, some students feel that being in an enclosed building is still dangerous and it is best to remain outside for occasions like eating out or attending large public settings.

“At restaurants, people are sitting really close together and I do not want to get anyone else or myself sick, so the risk doesn’t feel worth it,” Quinn Mulvey ’23 said.

Although some students don’t feel comfortable with traveling or dining inside currently, hopefulness still shines through.

“I definitely think I will be able to eat indoors comfortably in a few months,” Mulvey ’23 said.

It is predicted that around April 2, outdoor amusement parks will be opened, indoor stadiums will be increased to an audience of 10% and summer organizations such as festivals and camps are suggested to start planning for their opening in the summertime.

Many show eagerness to return to normal life and participate in leisure activities.

“This year my sleepaway camp is open for four weeks, and we will be congregated by age groups,” Tessa Tobias ’24 said. “We will not be coming into contact with other age groups for the most part.”