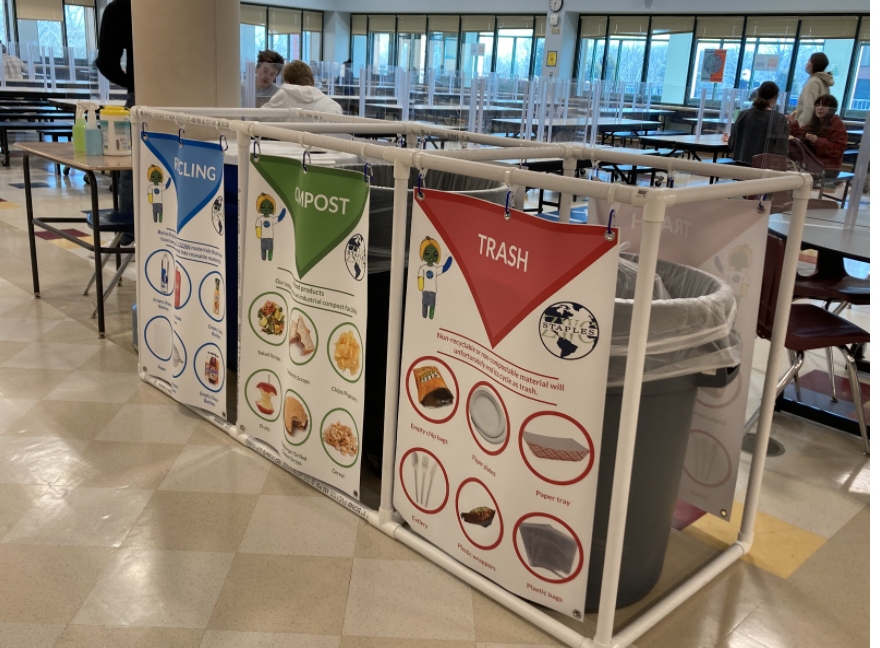 The new Staples compost bins are equipped with signs detailing the items that can be put in each.

The Staples cafeteria has always contained two different-colored bins: gray and blue, for garbage and recycling. But now, there’s a new bin: green.

These green bins, which come in compartments alongside the trash and recycling bins, are not for the disposal of all waste. They are for composting, a new school service set up by the Zero Waste Club.

Composting is a method of trash removal that allows organic matter to decompose and become fertile earth. Many people do it in their own backyards as a home project, but it can be difficult to maintain.

Staples utilizes a pick-up service that brings the contents of the compost bin to an industrial composting facility called Curbside Compost.

“Composting is rewarding, but can be difficult to do on your own,” the Curbside Compost website says. “We do all of the work, and you’re the one making it possible.”

Curbside Compost offers pick-up services to any location in Fairfield County that can be ordered by subscription.

“I think the bins are really helping, and the response will be even better once people get used to them […] composting teaches us the responsibility of recycling,” Lynnea Moskowitz ’22 said.

The goal of the Zero Waste Club is to reduce Staples’ waste and carbon footprint, and they plan on continuing with new initiatives beyond the compost bins.

“In the future, I think a goal for the Zero Waste Club would be talking with Chartwells to get more sustainable items, such as compostable trays and silverware,” Smith ’21 said. “Once we have the compost bins, we need to go back and correct what isn’t working.”

The club is still focusing on improving the compost system for easier and more efficient use.

“I’m hoping that our club will be able to keep going and get more support from the community,” Frankie Lockenour ’23, a member of the Zero Waste Club, said. “I think if people know about how composting works, more of them will use it.”

“The trash bins are still there,” Lockenour ’23 said, “but if you walk just an extra few steps you could really be helping the environment.”