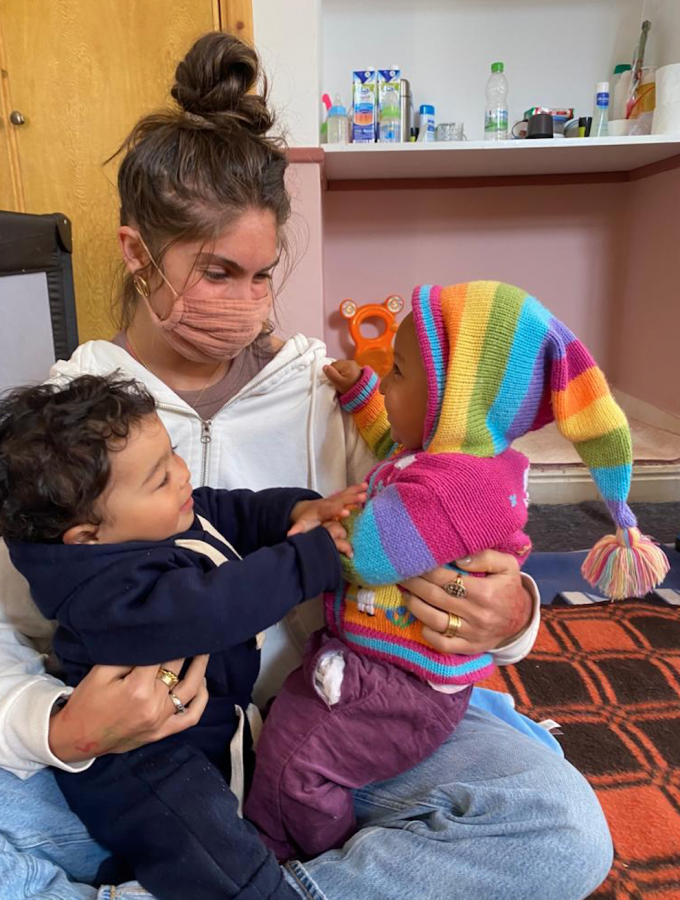 Remi Levitt '21 sits with two children from the orphanage where she volunteers. The American Friends of Atlas Kinder Foundation is an organization founded by her mother, Keri Levitt, and has inspired Remi's return to Marrakech this winter.

It’s not often where a vacation transforms into a desire for a whole new lifestyle halfway across the world. Yet for Remi Levitt ’21, this became a reality as she completes a whole month exploring Morocco while learning online, returning at the end of April.

AFAK, American Friends of Atlas Kinder Foundation, founded by her mom, Keri Levitt, inspired the family to return to Morocco after their first trip to Marrakech, where Remi volunteers. This foundation has provided homes for many orphaned children in Morocco, as well as aided up to 170 children. In addition to working in the orphanage, Remi and her mother are constantly immersing themselves in the culture of Morocco, including style, decor and cuisine.

“I used [the pandemic] to start a foundation in the U.S. to help support the work being done on the ground in Morocco,” Keri Levitt said. “I formed AFAK and we built the first nursery at the village where 25 newborn abandoned children now live.”

AFAK’s goal is to improve the shortage of nurseries and villages in Morocco, as well as ensure that each child is provided with a proper home and a prosperous future, according to the AFAK website. Remi has formed many bonds with the different children in the orphanage as a result of the time spent each day with them.

“When I’m at the village, me and the other volunteers who live there act as extra sets of hands for the ‘mothers’ who take care of the children,” Remi said. “I spend time in each house with the kids, either playing with them, taking them to and from their school classes/activities, or helping the mothers when they need daily tasks done.”

Remi believes that social media is one of the greatest ways to raise awareness about important causes within these communities and the orphanage and is the most effective strategy to gain a wider support for the foundation.
“I am also working on taking photos of daily life at the village to help build both the AFAK Foundation Instagram account and website,” she said. “The more people who know about the orphanage, the more fundraising and raising awareness we can do to support the children.”

While she immerses herself in the culture, Remi has online school on her agenda. With the six-hour time difference, her school days last from 2 – 8 p.m., leaving her mornings wide open for exploration.

“Most mornings I spend volunteering at Atlas Kinder and help to offer an extra hand to the other volunteers and ‘mothers’ who take care of the children,” Remi said. “Every day feels so incredibly full by being around the energy of the kids and really getting to get to know each child.”

Remi’s blog, Coat of Love, has served as an outlet for her, where she writes about style, food, decor and acts of good around the community. In December 2020, she wrote an entry about her experiences in Morocco as well.

“I had never visited an orphanage before and was shocked by how open the children were to love and affection — and generally how big their smiles were,” the entry wrote. “While the language barrier was difficult, I did my best to piece together my French and small Arabic knowledge to communicate with the children and other volunteers.”

Morocco has become an extremely special and valuable place for Remi and Keri, and for both of them, Marrakech is their happy place.

“What makes Morocco so special to me are the people who are the heart and soul of the country,” Keri said. “There is no better feeling than giving these children the love and hugs that every child deserves from a parent.”