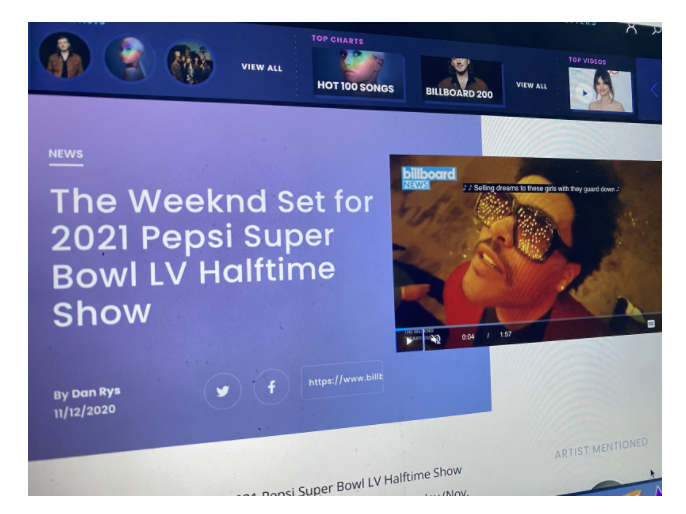 Candian singer/songwriter the Weeknd is set to perform during this year's Super Bowl game and will have to follow new guidelines due to the pandemic.

The Super Bowl is the annual championship game of the National Football League (NFL). Every year, fans gather with friends and family to watch the big game, root for their preferred team and feast on prepared food. Due to the ongoing global pandemic, however, capacity for the event has been limited to just 20% and the CDC has issued guidelines for Super Bowl parties. As a result, rituals are being modified and people are adjusting to the restrictions and difficult circumstances.

“My parents typically invite over our family friends but we aren’t this year,” Gabby Messenger ’22 said. “While I’m not a huge football fan, I do miss having large gatherings for holidays and special occasions.”

Each family has a different Superbowl tradition ranging from making a lot of food to putting out a variety of snacks for their guests.

“My family always makes a bunch of wings and shrimp and other finger food and we watch it together,” Nick Suarez ’21 said. “Usually we have friends over and sometimes family but this year we’re not, which is pretty disappointing but not the end of the world.”

Instead of canceling plans, some people are viewing the circumstances with a positive outlook. Some fans have scheduled Zoom meetings with family and friends so they can still spend time together and continue their tradition.

“My family normally hosts for the Super Bowl and we make a huge party out of it and invite a lot of our family friends,” Sophie Anderson ’22 said. “We can’t do that anymore because my mom is pretty strict about indoor gatherings, so this year we decided to host a family Zoom meeting.”

This year, the Kansas City Chiefs and the Tampa Bay Buccaneers will face off in the championship game. There is particular excitement surrounding this year’s game since it is Tom Brady’s 10th career Super Bowl appearance and he is now playing for the Buccaneers.

Not only has COVID-19 affected viewers of the Super Bowl, but also players, staff and even the prominent halftime show. The staff has been especially impacted due to the fact that less help is now needed based on the decrease in people attending.

“My mom worked in the Super Bowl last year as the head of the medical staff and wasn’t hired this year because they are only having the team’s medical staff,” Patrick Donovan ’22 said.

The halftime show occurs in the middle of the game and famous singers/songwriters are featured every year. This year, Canadian singer The Weeknd will perform. Fans will not be permitted to join him on the field during his performance.