Creating a community: The Porch At Christie’s 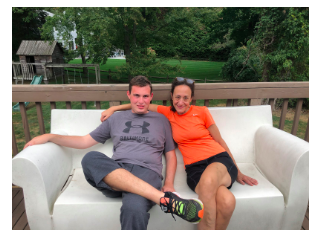 Nancy Wahler and her 21-year-old son Alex Wahler who has Autism and Epilepsy.

Giving back to the community was always something that Andrea and Bill Percoiello loved to do. After opening a bakery in Norwalk, where students with disabilities learned how to make pastries and work together to build their self-esteem, the Percoiello’s began to look for a place where they could serve their community with their students.

As co-owners of Sweet P. Bakery, a non-profit bakery in Norwalk that teaches young adults with special needs to learn how to bake, the Percoiello’s already had a lot on their plate, but for them, helping their students find friendship and a role in their own lives was one of the most important things they could do. Seeing that the old Christie’s Country Store space was up for lease, they knew it was the perfect place to fulfill their plans.

“[Christie’s] was a place where people wanted to gather and students would come and people who lived in the neighborhood,” Andrea Percoiello said, “and we thought that space was a perfect fit for what we wanted.”

Christening it The Porch At Christie’s, they were able to bring the old name that the town had known for so long back, while also being able to incorporate Sweet P’s ideas of having a purpose and being proud of oneself.

“Sweet P. is all about that letter ‘P,’” Andrea Percoiello said, “so purpose and proud and possibilities.”

As advocates for the town’s disabled citizens, the Percoiello’s wanted to do something special for individuals who are not always given the chance to work, while also bringing back the homey country store which so many students and adults in Westport had enjoyed.

“We wanted to do something for the community as well,” Percoiello said, “so what we are doing with The Porch At Christie’s is both the social good vision of Sweet P. and employing and training adults with disabilities.”

All three of their children were involved in helping disabled students while attending Staples High School. This gave them a glimpse at what people with disabilities missed out on due to stereotypes about their ability to perform in a work environment.

“We were able to see their struggles and what happened when these young adults turned 21,” Andrea Percoiello said, “and there just were not a lot of opportunities for them.”

For people like Nancy Wahler, mother of 21-year-old Alex, who is affected by Autism and Epilepsy, the new store is a welcome opportunity.

“The general public can see that special needs people can be employed,” Wahler said, “and can do something that contributes to society.”

Like many young adults with disabilities, her son is not always given the chance to perform a job in a working climate, but because of programs like the ones at The Porch At Christie’s, Alex is able to gain new skills and build self-esteem.

“I think there has been a positive outlook or incentive now that is good for everyone,” Wahler said.

With plans to open the store in March 2021, the Percoiello’s have a lot to be excited about. In addition, they plan to reopen the Frosty Bear ice cream hut and are having a contest to rename it. But for the Percoiellos, they are most excited about being able to help those who aren’t always able to be involved and be part of a community.

If you want to suggest an idea for the new store, email the Percoiello’s at info@theporchatchristies.com