Discussion highlights the benefits and drawbacks of student choice 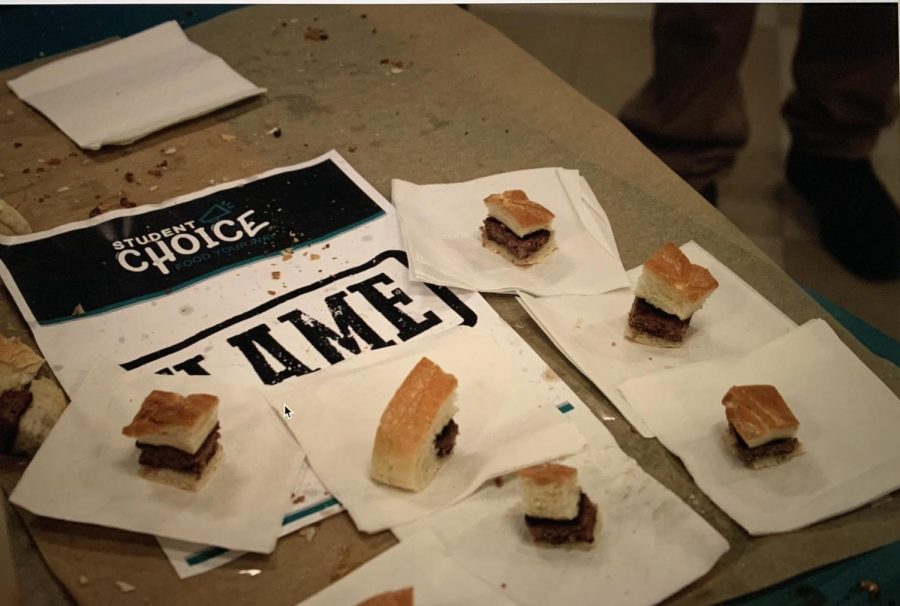 Students were able to vote towards chicken sliders or hamburgers through taste testing outside the Cafeteria.

Chicken sliders and hamburgers were put to the test on Jan. 24 through a student voting process outside the cafeteria to figure out which is a more popular purchase for students.
Many Staples students have expressed their concerns about student choice foods. Some feel like it is an ineffective way of getting students’ real opinions. Other students feel the display lacked an aesthetically pleasing presentation, causing them to turn away from tasting the foods.
“I wanted to be adventurous and try the chicken sliders,” Charlie Honig ’23 said, “but there was like crumbs and pieces of bread surrounding the napkins and it kinda grossed me out.”
Honig was one of the many students who had hoped for a more appealing display in order to push themselves to try the free taste testers.
“If I’m going to be honest here, I was not a fan of the hamburgers,” Nick Armentano ’22 said. “I felt like they lacked flavor, but they had so much potential. I need lettuce or some type of toppings on it.”
Armentano was eager to try the taste testers, as it was free food given out by the cafeteria — a hard thing to pass up on. Many believe that by adding toppings to the options, they could have been more appealing.
Viola Geisman ’22 felt as though the voting process was effective for the chefs to hear our feedback and opinions.
“I think it’s [worthwhile] for the chefs to make us vote for what dish we like the most so that they can continue to treat us with these delicious snacks,” Geisman said.
The voting process was ultimately put in place for the chefs to hear what would be purchased more by students in the cafeteria and what there should be more of. English teacher Jesse Bauks felt as though there were a few minor flaws to the process, and with some alterations, it could have been very effective for the chefs.
“I think numbers could be a super useful way of getting a readout of the students’ choice,” Bauks said. […] “We sold 300 chicken sandwiches and 100 burgers and then they could use the number to determine which one people enjoy more.”
Through Bauks method, the cafeteria would be able to see which food is more popular for students to buy, rather than putting the food to a taste test and having students vote, the statistics would show for themselves.
“I think the overall food at staples is really diverse and there’s a lot of variety in the different cuisines,” Stella Corenthal ’21 said. “It really encourages students to branch out and eat a balanced meal during a long day of learning.”