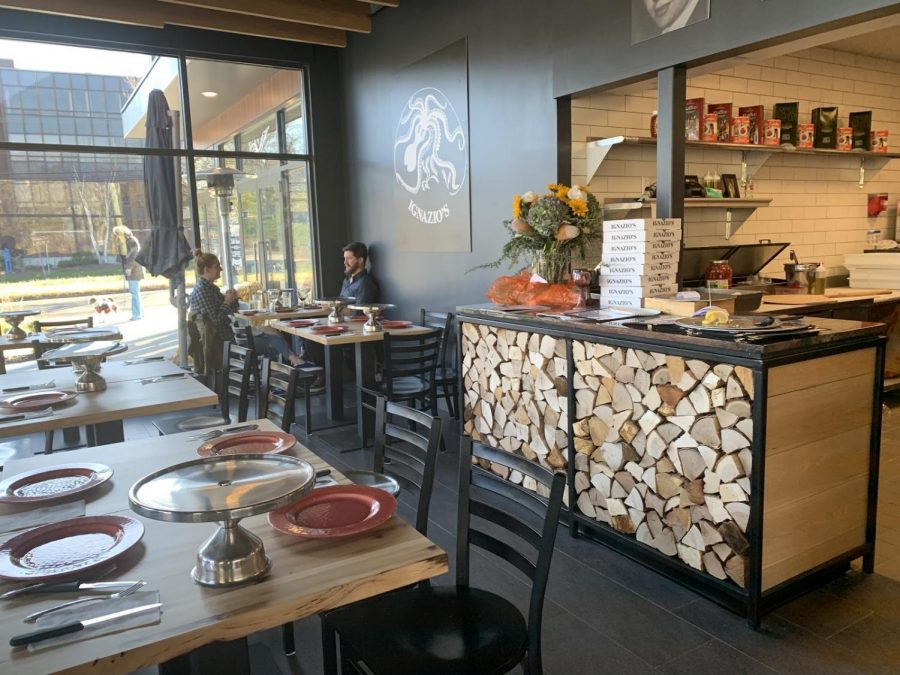 Ignazio’s is not only a sit-down restaurant, but it also has takeout. The restaurant is designed modernly, but it portrays a similar look to the Ignazio’s in Brooklyn.

A steamy, cheesy, magnificent slice of pizza that used to only be found in Brooklyn, New York, can now be found right here in Westport.

The newest pizza restaurant opened on Monday, Nov. 11, at 833 Post Rd E. Ignazio’s pizza originated in Brooklyn, New York- located right under the Brooklyn Bridge. The restaurant was such a hit that it became the second busiest pizza place in Brooklyn. Owner Louis Salvatore Termini was eager to open another Ignazio’s because of the successes that the original location had.

Termini enjoyed living in the city and his restaurant was doing great, but he missed Connecticut and wanted to go back.

He had always stopped for lunch in Westport heading to his other restaurants in Connecticut. Termini really liked the town so when thinking of a good location to open up a new Ignazio’s, Westport came to mind right away.

“I wanted to help out because they needed a pizza like this one,” Termini said.

The restaurant has a wide range of Italian food from D’Artagnan’s Wings, organic free-range chicken wings, to stuffed mushrooms. The menu includes various specialty pizzas including shrimp pizza, a white clam pizza and an all-veggie pizza.

A staples student who got take-out from Ignazio’s loved the uniqueness of the pizzas and all of the different options.

“They have pizza with avocado and bacon on it, which I love,” Bridget Looby ’21 said.

So far, the restaurant has been doing exactly as Termini had hoped. On Sunday, Nov. 10, he hosted an invitation-only party and invited 100 guests. He was shocked to see that nearly 400 people showed up. Termini was satisfied with this event and felt that it was a great beginning to the new restaurant.

Termini already has big plans for his restaurant in the future. His close friend, who also happens to be the director of the Norwalk Symphony Orchestra, was his customer for 25 years and wanted to come to the restaurant with the band and help promote it.

“On the first nice weather day in spring or maybe even in the winter the entire symphony orchestra will appear in front of the restaurant wrapping around the whole front of all the buildings,” Termini said.

Knowing this will bring in new customers and Termini is excited for the event to occur.

“It will be newsworthy,” Termini said. “That will be our ribbon cutting as well.”