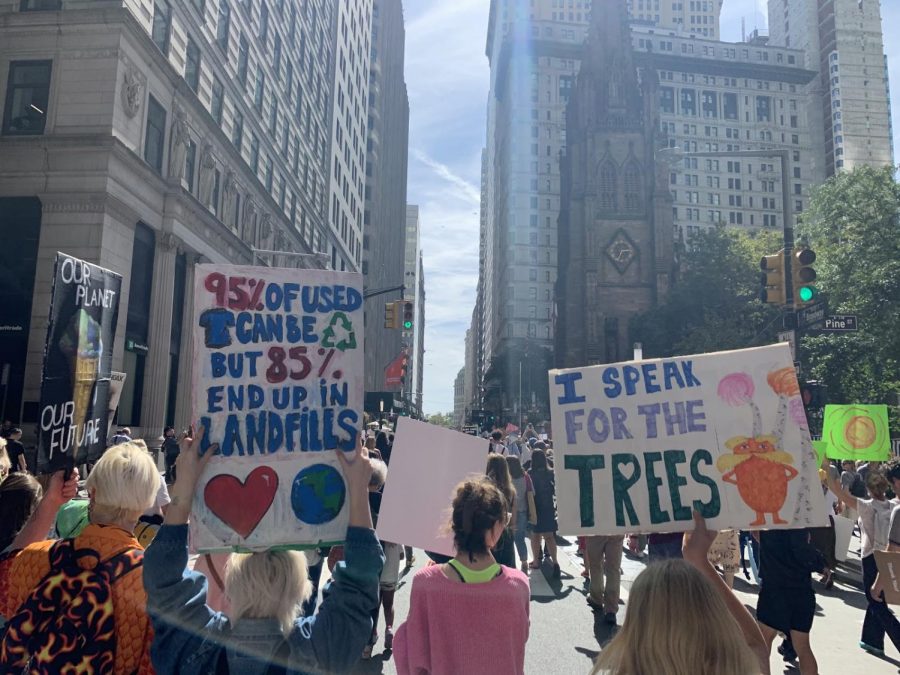 Thousands of people of all ages took to the streets in the Climate Strike in NYC on Sept. 20 to fight for environmental causes.

Endless headlines about climate change and climate activists have circulated around the media for months now. Lots of people are fed up with the government’s lack of initiative to combat these issues, and even children, including many Staples students, have started to take it upon themselves to take action.
“With politics, no one’s really doing much with [climate activism]. We’re really hoping the UN is going to do something but currently nothing’s happening,” Sophia Checker ’22, a member of the Climate Activism club at Staples, said.
The Climate Activism club is a new club at Staples, with presidents Lys Goldman ’21 and Claire Redmer ’21. The club is hoping to implement eco-friendly strategies into Staples, including a campaign for a more effective recycling system. They also strive to advocate for an increase in the usage of reusable water bottles.
“It’s the little things that matter the most, and if everyone does a little thing it could impact [the environment] in a very big way,” Julian Fiore ’22 said.
According to Rubicon Global, a recycling company that develops new and innovative ways to reduce waste, although 75% of America’s waste is recyclable, only about 30% of it is recycled. Ultimately, a more effective recycling method would certainly eliminate some of the huge environmental issues facing earth today.
Many Staples students also demonstrated their passion for the environment by attending the Climate Strike. Staples students attended both the Westport strike, as well as the one in New York City for a variety of reasons.
“My mom owns a carpool company whose main goal is to reduce carbon emissions, so I went to support what she does in the best way I knew how,” Leni Lemcke ’22, who attended the New York City Climate Strike, said.
Other students merely wanted to experience an atmosphere in which hundreds of people shared the same passion for the environment as they do.
“The climate strike was really great,” Checker said. “There was a whole bunch of people that cared about the same things […] I know a lot of people in the crowd were just really passionate about it.”
According to The New York Times, there were an estimated 60,000 protestors marching the streets of New York City that demanded change.
“It’s all about bringing more awareness to the issue,” Sofia Abrams-Rivera ’20 said, “and making sure that all the students are being more self conscious about what they’re doing both at school and at home.”