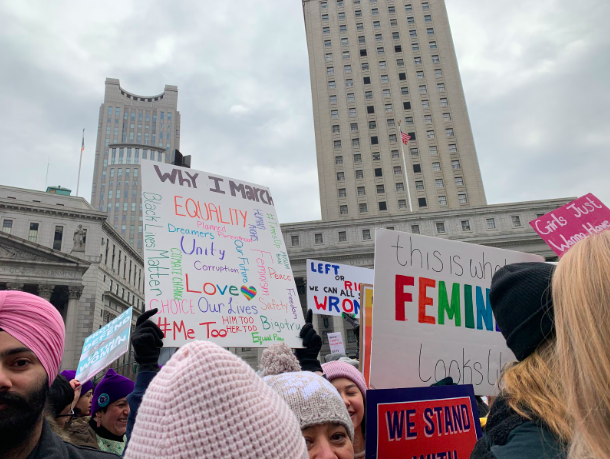 Participants of the 2019 Women’s March on New York City hold signs and march to protect their rights and promote equality.

While marches oftentimes aim to bring together groups and communities, this year’s Women’s March on Jan. 19 did the opposite after its organizers became associated with anti-Semitic beliefs.

Elana Atlas ’21 felt troubled by the accusations against the founders of the Women’s March concerning such beliefs, and for that reason chose to not take part in this year’s March.

“Participating in a movement full of tensions and potential injustice when I could be contributing to a unified movement, and thus making more sustainable change, was not worth it for me,” Atlas said.

The organizers of this year’s Women’s March have been associated with Louis Farrakhan, the leader of the Nation of Islam, who has a history of making anti-Semitic comments. Tamika Mallory, a founder of the event, has publicly praised Farrakhan, even calling him “the GOAT,” an acronym for the “greatest of all time,” on a social media post.

“I’m disappointed in the hypocrisy of the leaders of the March as the Women’s March always advertised itself as an organization that includes and accepts everyone,” Eliza Oren ’21 said. “I’m discontented that some people didn’t take this seriously and went despite being fully aware of the anti-Semitism.”

Staples students were not alone in their feelings concerning the event’s association with anti-Semitism as many groups dissolved their partnerships with the March, such as the Democratic Party, the Southern Poverty Law Center and the Human Rights Campaign. The 2019 March had less than half as many partners than their 2018 March that had 550 official partners according to The Wall Street Journal.

Cailyn Lesher ’20 was shocked upon hearing the accusations.

“I feel duped by a community I used to take an active part in,” Lesher said. “I thought of the Women’s March as an extremely inclusive group of like minded individuals who fought for equal rights for everyone which turns out is not the case.”

The annual Women’s March was created the day after President Trump’s inauguration, Jan. 19, to call attention to the threats the Trump administration presented concerning reproductive, civil and human rights.

Josh Buckman ’19 chose to attend the March because regardless of the accusations, he feels it is important to continue fighting for equality and justice.

“There is still so much work to be done, regarding unequal pay, LGBTQ+ rights, laws about violence towards women, women leadership roles and racial injustices,” Buckman said.

Aware of the criticisms towards the Women’s March leadership, Bri Eagan ’18 chose to attend a women’s march in Boston which was organized by March Forward Massachusetts.

“It was reassuring to know, Eagan said, “the people that were organizing my march weren’t controversial.”