Staples community opens its doors for the 8th graders 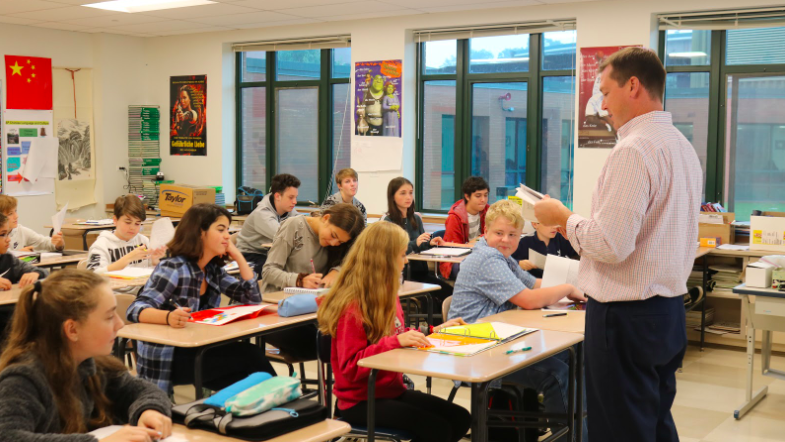 Although few of the Staples students have been able to see them during school hours, the CMS eighth graders have joined the high school, yet run on an entirely different schedule. Despite this, Staples’ newest additions have made an impact on the students and faculty.

The students and administration of Staples have been accommodating for the new students and took many measures to provide them with the safest and most comfortable learning environment possible, which includes keeping them totally separated.

“They are kind of sectioned off into one section of the building and they are going to each lunch in a different section after the three [high school] lunch waves,” Pat Micinilio, Staples Assistant Principal, said.

Aside from the safety of the students, the availability of classrooms was also a large concern, considering how crowded Staples already was. It was clear that adding 160 more students would require moving some classes to different rooms. James Farnen, Staples Assistant Principal, and Andrew Carroll, freshman Grade Level Assistant, both assisted with finding classrooms for the eighth graders. This involved many teachers in the world language department to be moved around,  to allow the CMS students to attend classes only in that one section of the school. Thus, the language teachers were placed in other rooms that were available during that specific period.

“I understood they were in a difficult situation, so obviously, being a professional like a lot of my colleagues, we were willing to do whatever needed to be done to have those students have a place to go to school,” Eamon Griffin, world language teacher, said.

Although it is a big transition for the faculty to be teaching in unfamiliar classrooms, most are happy to help out the eighth graders who need a place to learn.

There are also many students in the building who have recognized the changes being made and understand what they can do to make this easier on the new students. “The high schoolers, having been eighth graders […] can relate in the sense that the little kids are scared and [the high schoolers] won’t do anything to harm them or make them feel less safe,” Ella Williams ’22 said.

Staples students have modified which hallways and staircases they take to get to each class so they don’t interfere with the learning of the eighth graders during their class periods.

“I have to use the staircase in the middle of the school rather than going through that [eighth grade] hallway and my Spanish class also got moved,” Jack Saltus ’19 said.

The students at Staples have been doing their best to ensure that the new students have a safe environment to learn where they don’t have to worry about interacting with kids up to five years older than them.

While the relocation to Staples was unexpected, a number of eighth graders feel it was the right decision. “I think Staples was the best fit for us because we would be there next year […] I think it went as smooth as possible,” Riley Twiss ’23 said. Twiss mentioned the increased presence of security and police officers to guide and support her and her classmates added to her sense of comfort.

“When I first got to the school everyone was really nice and helpful,” Finn Wolter ’23 said. “I started to feel a lot less nervous.”

However long the Coleytown students must attend Staples, the Staples community is here to lend them a helping hand.