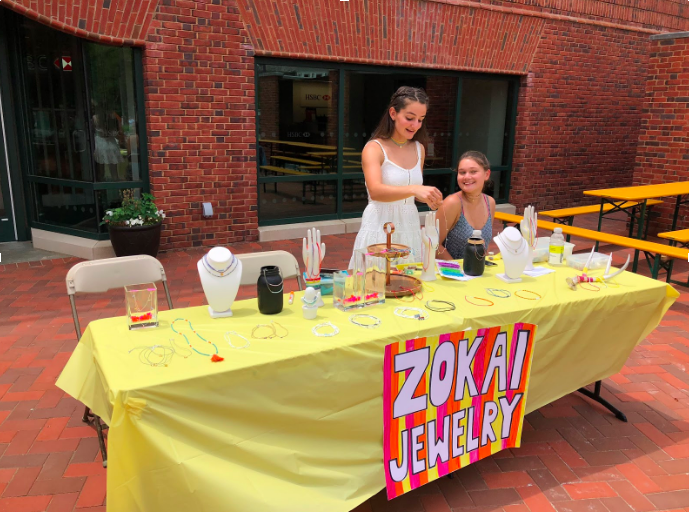 On Saturday, June 9, many local student businesses could be spotted downtown showcasing their work at the Student Creation Fair. Each student-run business had a table set up with their information and products open for the public to explore. The event was put together by the Westport Youth Commission, a local organization in town comprised of student representatives,.

One of the many booths at the creation fair was Zokai Jewelry, founded by Zoe Barnett ’19 and Kai Dasbach ’19. Zokai Jewelry specializes in custom beaded bracelets, necklaces and rings.

“We both liked making jewelry separately and always talked about starting a business,” Barnett said.

“When we found out about the creation fair, we thought it was a great way to display our work,” Dasbach added.

While the idea of Zokai was sparked through a shared passion, Hannah Roseme ’18 started another handmade jewelry business, H Beadz, after getting inspired through an advisor on a service trip she took in February.

“On my B3 team I had an adult advisor who made her own jewelry and she gave us bracelets that she made at the end of the trip,” Roseme said. “I thought it was a really cool idea because it was affordable and you could make it yourself.”.

Similarly to Roseme, Hillary O’Neil ’19 found the inspiration to start Pebbles + Posies, a handmade terrarium business, from her mom who is a landscape designer. O’Neil said that her mom knew many places around town to get the supplies to start.

O’Neil had been making terrariums since she was young but realized that she could replicate ones she saw in stores. “I used to make them for fun, but when I saw how expensive they were from places around town, I realized that I could sell them for less but still have the same quality,” O’Neil said.

On the more artistic side of the creation fair, Ally Feder ’20 was supporting her booth Flash by Ali, which specializes in photography. Feder has been doing film and photography for about three years and decided to turn it into a business after she found herself always taking photos for friends and family.

Feder came to the fair last year and thought it was a great way for students to get exposure to the public. “This year, I received an email about the event I thought that it was a cool way to get clients and promotions,” Feder said.

In a similar field, Tommaso Scotti ’20 took his passion for graphic design and created TommyBoy Designs where he makes custom prints. The creation fair was Scotti’s first public exposure since he just started the business.

“I liked making art but never sold it,” Scotti said. “And I realized that I was good enough to sell it so I decided to create a business out of it.”

Overall the Student Creation Fair gave student-run businesses public exposure and showed off their hard work. Each booth was unique and truly represented the students’ passion.