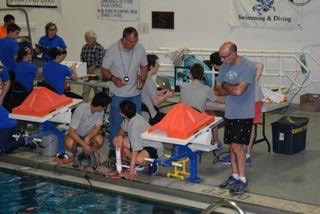 After months of designing, tweaking, breaking and fixing, a team of student engineering enthusiasts took on a particularly difficult challenge: constructing a robot that can keep harbors safe, install infrastructure and help protect the environment — all while underwater.

The team “Curiodyssea,” which consists of Daniel Westphal ’19, John McNab ’19, Nicolas Durkin ’19, Tyler Edwards ’20 and Nathan Wang ’20, competed in Sandwich, Massachusetts on May 6 in the New England Regional competition. After presenting their remotely-operated vehicle (R.O.V.) design and sweeping top honors in all categories, the team has qualified for the international event for the second year in a row. They will compete in Seattle, Washington in June with rivals from across the globe.

“Honestly, it was a lot harder to get first this year because there were many more competitive teams,” McNab said. “Last year, it was kind of a blowout. Again, this year we swept the awards, we literally won all of them. But there were a few teams that scored pretty well in the pool.”

Last year, Curiodyssea also won first at the regional level and competed in Long Beach, California for internationals. Westphal says they have been preparing for this year’s competition since September, working in three to five hour spaces every weekend to improve their previous design.

“It just continues from year to year because we’re just constantly improving our design,” McNab said. “I know at least after the international last year I was doing plenty of stuff to think about what to do in the next year, so the design process never really stops.”

Each year, competitions are sponsored by Marine Advanced Technology Education (M.A.T.E.) with the goal of encouraging students to creatively apply engineering to solve real-world issues. Over 2,000 schools compete in countries around the world annually, according to their website. The event consists of a 25 page tech report, a poster presentation, safety tests and a pool test.

Many members of the team were drawn to the competition due to the uniqueness of underwater robotics. “Unlike other online robotics, we have to waterproof things, so it’s really different with these different motors, different casings for everything,” Wang said.

Westphal noted that each team member had a particular skill set and role that ultimately contributed to putting the robot and the presentation together. “We have technical roles, company roles and poolside roles, the roles that we have while the robot is accomplishing missions,” he said. “So we all worked in our specialized areas, and then we all come together along the way to implement all our parts together and create a whole R.O.V.”
In June, Curiodyssea will join teams from as far as Saudi Arabia to showcase their R.O.V. They have already made improvements on their design from regionals and anticipate more difficult tasks than last year.

However, Westphal says their hopes are high. “If you really put in the work for the competitions,” he said, “then you’ll do well.”