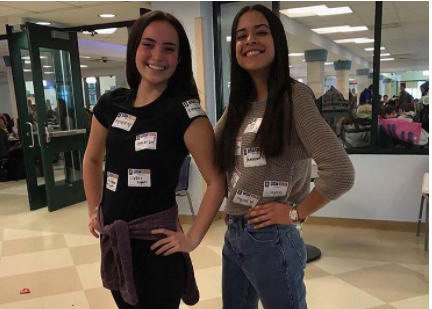 Recently, the Staples JSA club has joined a nationwide campaign called “Fight Apathy,” which aims to “encourage students to think about what’s important to them,” in the words of Claudia Guetta ’18, President of the Staples chapter of JSA.

“Whether it’s a sport, eliminating the wage gap, or even enforcing immigration laws, we hope to encourage students to take a minute and think about what’s motivating them, what they care about, and to spread awareness about their passions,” Guetta said. But how can students go about doing this?

During all three lunch waves this week, JSA will be handing out stickers in front of the cafeteria, which all state “I believe…” followed by a blank space for students to fill in a social or political statement that they feel strongly about.

Junior State of America (JSA) is a nationwide organization that was created with the intention of educating and preparing high school students for their involvement in America’s democratic society. Through this club, Staples students are able to discuss important political issues with their peers as well as broaden their perspectives by attending conferences and discuss issues with students from other states.

“It is just good to see the school community take a voice, for whatever they want to see done… it’s important to be a part of something bigger than yourself, both in being a member of this school and a member of JSA,” Eric Schwartz ’19, the Director of Debate, said.

Irrespective of party affiliation, JSA is open to all those who are passionate about current events and staying both politically and socially active. “I’m a Republican, and I know most of our school’s people are Democrats. That being said, I think it’s important that the two sides work together to see how we can make American society the best it can be,” Schwartz said.

In the past JSA has led fundraising events to support those living in underprivileged communities. They also attend three regional conventions every year where students debate bills which, if they are successfully passed through student voting, are ultimately sent to the U.S. Congress.

Sophie McCabe ’19, Vice President of this chapter of JSA, says that it is important for Staples students to know about this campaign as well as participate in it because “it is both a good way to learn from others about what is going on both in our nation and around the world, and because it is important to take an active role as a young American citizen.”