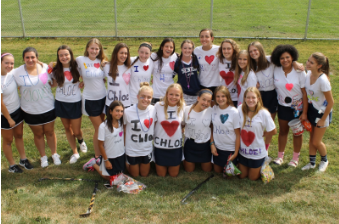 Staples High School’s annual Pep Rally took place this past Friday, September 23, at the Staples Football Stadium in order to kick off homecoming.

Students gathered to celebrate school spirit and raise cancer awareness by wearing pink for the annual pink out game. The excited atmosphere could be felt by both the students in the stands, and the athletes who performed with their fall sports teams.

“The pep rally is always lots of fun because the whole school gets to show a lot of spirit and come together as one,” Dara Kissel ’18, member of the field hockey team, said.

Many teams use the pep rally as a way to bond as a group and get prepared for the season to come, including the girls’ volleyball team

“I think it shows a lot of spirit as potential FCIAC and state champs, this is a pretty important moment for us.” Ginny Gerig ’17, girls’ volleyball captain said

Each sport was able to choose their performance, and while some teams such as field hockey, girls’ cross country and girls’ volleyball went with the original dance routine, some teams went for something different.

Both the boys’ soccer team and the boys’ water polo team performed a tribute to Harambe, a gorilla who was controversially killed after he clasped onto a 3-year-old boy just outside his habitat. Girls’ soccer performed the famous “water bottle flip” and the football team did their annual walk across, this year including a stunt in the middle.

“We’re very excited for the pep rally this year because we are trying to build on our performance last year about throwing onions into the crowd and were excited to show you what we have this year.” Josh Berman ’17, boys’ soccer captain said