Korus Helps the Community One Scarf at a Time

Eve Korus ’17 isn’t your average 17 year old. She’s wrapped up in her varsity soccer team, close knit circle of friends but most importantly, her very own charity: Wrapped in Love.

At the start of this year, Korus founded a charity with the mission to provide scarfs to cancer patients to make the loss of their hair just a little less painful.

“I got the idea when my family friend was diagnosed with cancer and spoke about how patients rarely receive head scarves,” said Korus. “I knew I had to do something about it.”

Charity wasn’t foreign to Korus before she started her own project.

Korus has been in touch with her charitable side as she’s been a member of National Charity League (NCL) since the seventh grade, but Korus never had to take charge of her very own service project and had no clue of the undertaking it required to start her own project.

“I received close to 1000 dollars in just 2 days,” Korus said. “Words can’t express how thankful I am for my friends and family.”

Mary Heery, a breast health specialist at Norwalk Hospital, worked closely with Korus on her project. Heery applauded Korus for her good will claiming that, “lives have been touched by her thoughtful kindness.”

“It just feels really good to know that I can make an impact on my community with something as simple as a scarf,” Korus said.

Korus’ close friends have seen the impact that she is making on the community.

Lydia Shaw ’17 has been best friends with Korus since the sixth grade and has experienced Korus’ generosity first hand.

“Eve has always been very generous and nice to people around her,” Shaw said. “It’s no surprise she would take that to benefit the greater good of society.”

Korus plans to do at least four more collections and is excited for what the future holds, making an impact on the world around her, one scarf at a time. 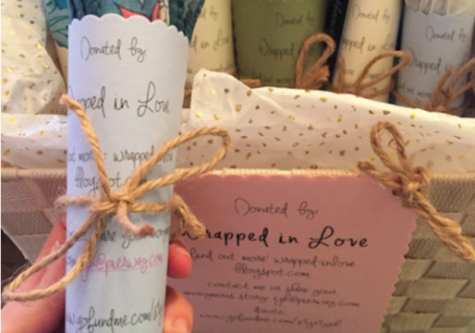 An example of the packaging including in the scarves passed around to radiology patients at Norwalk Hospital.