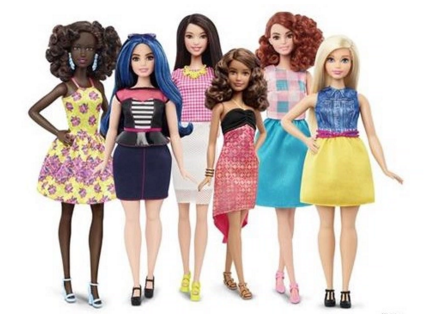 Fifty seven years have come and gone in the Barbie company, and the doll has barely changed. The infamous blonde, blue-eyed, skinny model has been the face of Barbie forever. However, due to complaints of their unreachable beauty standards, Barbie is changing.

There are three new body types: curvy, petite and tall. These dolls come in seven skin tones, 22 eye colors and 24 hairstyles. Also, the heels are movable so she is not perpetually stuck in a high-heeled position.

This huge change has pleased many students because the impossible body image that Barbie advertised in the past is now gone. Maria Tergis ’18 is hopeful that this new line of dolls will prevent others from desiring the unattainable Barbie body.

“I hope it will prevent others from feeling like they will have to conform, or that they aren’t pretty because they don’t look like a Barbie,” Tergis said.

The goal of looking like a Barbie is simply unattainable and unnatural. According to a study done in 1994 by Brownell and Napolitano, Barbies aren’t close to the average body at all. In fact, this has been called a “distorting reality” for children.

However, now that the new line of dolls is out, kids will be able to play with a more reasonable version of Barbie.

“I think it will be nice that they will have more of an influence that is more realistic than a tiny little blonde doll. Now they have more originality,” Rachel Wolfe ’18, a student in one of the child development classes said.

Tergis agrees, and thinks that it will benefit the children in the future. She used an example of going to the store where “they can look at [the dolls] and say, ‘hey this looks like me.’”

Linda McClary, the child development teacher at Staples, appreciates Barbie’s change. After years of having class with children, she has begun to see a pattern where children play with dolls that look like them.

McClary supports Barbie’s change because she thinks it will help the kids feel identified, and it is reflective of what they look like.

In class, the students are taught lessons that reflect this.

“[In Child Development] we talked a lot about stereotypes and how toys portray certain stereotypes, which was how Barbie used to be. But now it is pushing that away; they are letting children have more options,” Wolfe said.

However, McClary is doubtful that the Mattel company is doing this out of the goodness of their heart. In fact, she thinks it is all a way to increase wealth — and it’s working.

Barbie has recently been in a three year slump; sales have gone down drastically. In 2014, it went down 16 percent– so much, that CNN asked, “Is Barbie Dead?”

Nevertheless, publicity and sales have shot right back up due to their release of these new dolls, named “fashionistas,”  supporting McClary’s claim that Barbie only changed for the money.

McClary still does support their advancement, and thinks it will benefit the children playing with them.

“I always appreciate when companies are less sexist and gender oriented,” McClary said.