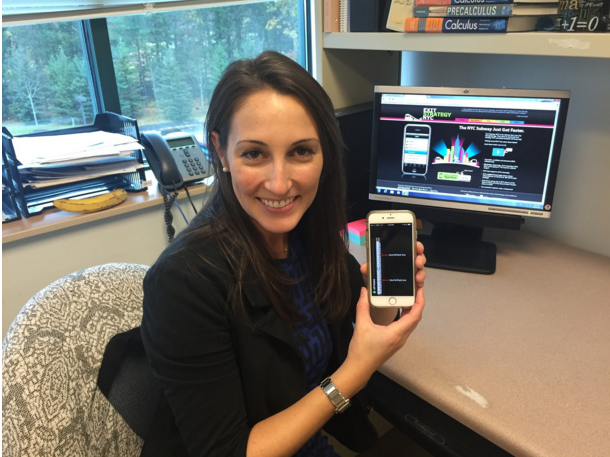 Getting off New York City subway stations is always a little confusing for everyone. But a teacher here at Staples actually created an app to help people out of their sticky subway situations.

Math teacher Ashley Tomlinson, formerly known as Ashley Wegener, made an app with her brother called Exit Strategy NYC. This idea was inspired after a conversation they had about how convenient it would be if people knew where to stand on the subway so when they got off, they’d be right at the exit.

Soon, the business was born.

“We had to travel to every single subway station in NYC. We went around with clipboards to figure out where the best exits were to exit the station and we sat there waiting for a train to come. We counted the number of cars and would say ‘OK the 8th car second door is the perfect place to stand,’ then we would hop off that train and go to the next station and get off and do it all again,” Tomlinson said.

This tedious process was especially hard during rush hour when communicating was nearly impossible. But Tomlinson and her brother soon became pros at subway hopping “thanks to their trusty unlimited metrocards,” Exit Strategy NYC claims.

It took around two months to collect all of the data for the subways in Manhattan and parts of Brooklyn, then another two months using computer programming to generate screenshots.

Tomlinson and her brother became very close during the four month process, “It was a really good experience. We actually got to explore a lot of New York City so we would find ourselves in somewhere in Queens where we’ve never been so we would get out and have lunch there one day or just go and explore different neighborhoods. It actually got us out of our comfort zone,” Tomlinson said nostalgically.

Students of Tomlinson’s are extremely impressed with her success, “It’s really awesome that one of my teachers has made her own app. I think it goes to show how skilled she is at using the knowledge she has learned,” CJ Stephan ’16 said when he found out about the app in class.

Tomlinson is definitely open to the idea of creating another app during the summer when she’s not teaching, noting that, “I think apps are a great forum and media for information that we don’t have in one central location.”