Bruce Jenner transitions students to speak up about gender dysphoria 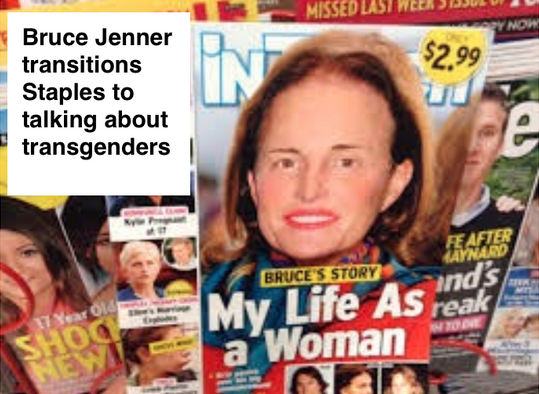 Bruce Jenner, the once all American boy, has recently decided to transition into becoming a woman at the age of 66. The transition from male to female comes with many difficulties, such as the switch from male to female pronouns or explaining your situation to friends and family. Her planned release of her new image is said to come out in the middle of July.

With an expanding transgender presence in Westport, her change has stirred up silenced emotions in the halls of Staples, the town, but especially the transgender community.

“I honestly love the idea that someone who has been idolized by America for so long is able to come out as transgender,” Chaundelette Halper ’16 said.

“I feel it’s important to be who you want to be, not who society tells you to be,” Dane said.

But what bothers Halper the most is that we see these issues and nobody does anything.

“I mostly hate that whenever you hear about a trans* person in media is because of a hate crime or a suicide. We live in a cis-hetero-normative society where trans* people are forgotten or we make them know we treat them poorly and question their sanity,” Halper said.

While these are issues more on a more national and global scale, there are issues just as substantive that exist right here in this town.

Halper explains that the main Westport transgender issue is having to deal with binary gender wording and stereotypes that go with it, because most transgender people do not fit in with binary genders. In written terms, the word trans* with the asterisk, refers to a larger grouping of people, encompassing those who are genderless, transvestites and much more than just a gender switch.

Another issue in Westport, according to Halper, is the silent, or not so silent, judgement from Staples students.

“Another Westport issue is [expletive] boy looking at you differently when you’re trying to be yourself. Yeah, I don’t feel comfortable wearing dresses to school because I see people stare and point at me for being different,” Halper said, “and in Westport, transgender issues do occur with all the trans* and gender variant friends.”

Dane reasserts that it is important to feel secure in your own body.

“I think it is good that he finally gets to be comfortable with himself,” Dane said.

Halper made sure to clarify that while these are his feelings on the topic, it is clear that, people in our community with same dilemma have their own story of their struggle to deal with gender binary.

In the future, Halper and others hope to see a transition in the acceptance of transgender culture, but as for now, Halper says, “I hope for the best for Bruce, and I think it’s great she is being true to herself.”