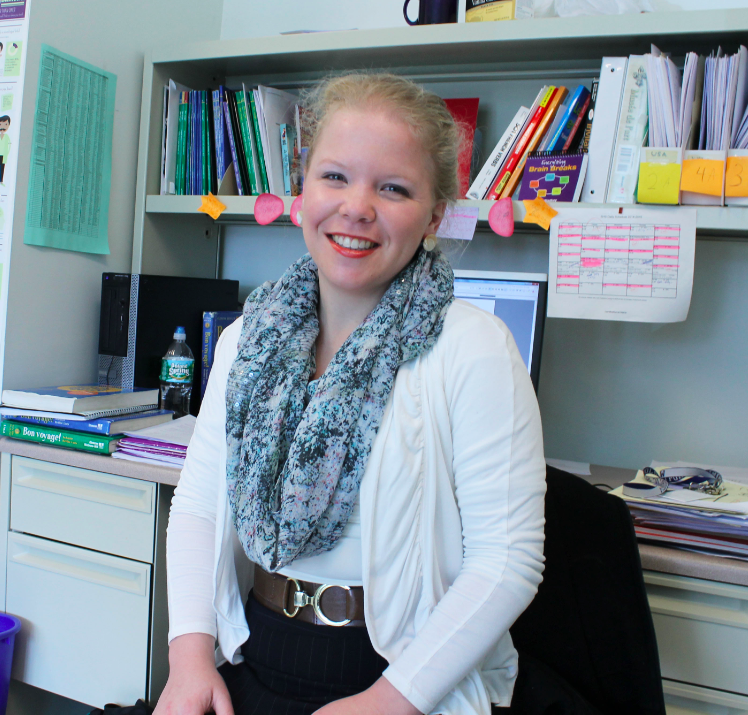 Madame Caroline Henry, a Houghton College and University of New Haven graduate, is a new addition to Staples’ world language department, but she’s not new to brightening up a classroom with a simple “Bonjour.” Having subbed for three years, she started teaching full time this 2014-2015 school year.

Her enthusiasm is both bold and undeterred, idealistic and practical.

“Each day is different, and some leave more shining moments than others,” Henry said.

Arriving before the 7:25 a.m. bell is enough to put some pep in Henry’s step.

But that’s just one happy moment of Henry’s day. She teaches French 2A, 3A and 4A, and each class brings forth a smile.

“Each class has such a different personality, work approach and sense of humor,” Henry beamed, and she holds hope that, in her class, they are “in a place where learning language is a good— relevant, engaging, colorful— experience.”

French class should be “a space where everyone feels welcome,” Henry said. But Henry believes French is more than just a language, and does more than fulfill a graduation requirement.

“Through the language, you get to teach the culture of the places that speak French! How fun is that, to take a glimpse inside another person’s world?” Henry said, with a nod to the French and Spanish art prominently displayed throughout the World Language department.

Learning a language is also both practical and artistic.

“French is an official language of the United Nations,” Henry lauded and “has a rich literary and artistic heritage.”

Henry’s “favorite” way to teach France’s diverse and beautiful culture is through projects. Henry considers these projects to be not only fun but also engaging and a pleasure to watch. Her 2A class is currently doing a theatrical project, and their “acting skills” are impressive, Henry said.

“I get to know a little bit more about [my students]” Henry added.

But don’t worry. Henry’s classes aren’t all play and no work.