Confessions of a binge watcher 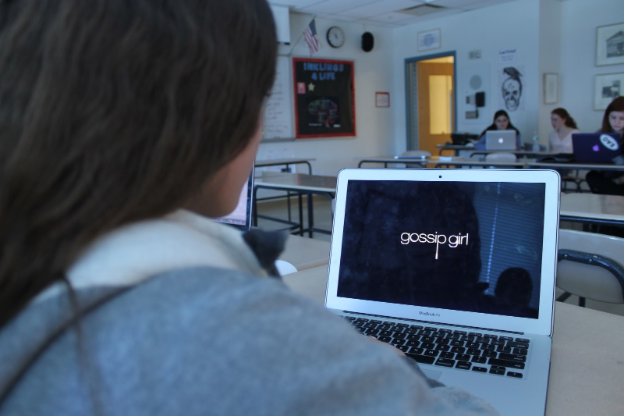 Glued to the computer all night, absorbing episode after episode, and season after season. This is the life of a binge watcher. Numerous Staples students regularly carry out this routine. Some are more hesitant than others to confess shows they love but may be embarrassing to admit.

Mikayla DiDonato ’17 is one of those students who was brave enough to admit to her love for the reality television show “Summer Break.” Summer Break introduces viewers to the lives of eight rich high school juniors and seniors, and follows them through their last summer together in California.

“As dumb as it is, it can get very addicting and I find myself waiting for each episode to come out every week,” DiDonato admits. “I like it because they’re short episodes, so I know I’m not completely wasting my time watching random famous teen’s lives.”

“Teen Wolf” is another popular show that students would rather not admit to watching. The show is about a guy named Scott McCall who usually goes unnoticed. One night, he gets bitten by a wolf and is becomes a werewolf. The show is about Scott’s experiences in his new identity and it becomes very intense.

Two students built up the courage to confess their love for the show. Harrison Ames ’16 reveals that he “love[s] Teen Wolf [be]cause it’s [cool] and you get mad babes by watching it.”

“The Bachelor” is loved by some students at Staples, although some may be extremely against it. The show gives one man and 25 woman a chance to find “true love.” Each woman tries to win over this one man with each date, and receive the rose that allows them to move on to the next round.

Kenji Goto ’16 confesses that, “The Bachelor is a show that keeps you wanting more each week. You get personally attached to some of the participants and hold grudges against others… Overall, even though the show’s pretty stupid sometimes, it’s equally as entertaining.”

“Gossip Girl” is another show that some people – specifically male students – would rather keep on the down low. It is about the lives of privileged teenagers on the Upper East Side: where no secrets can ever be kept unknown, and no drama can go unheard.

A male student at Staples prefers to keep his identity anonymous but admits that “Gossip Girl is extremely addicting and always keeps me wanting more. I can’t just watch one episode at a time,” he admits. “I end up watching three per day, but my all time record is eight.”

These four television shows are avidly watched by Staples students, and although it took courage, they finally opened up about their binge-watching habits.