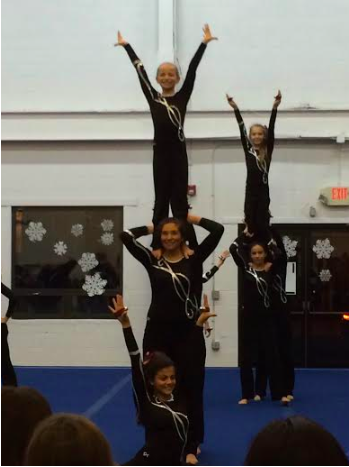 The crowd sat in anticipation as the gymnasts started to wrap up their warm ups. The Showtime team surprised the audience with an exclusive view of their skills; flips, cartwheels, back handsprings, and so much more.

Jovial holiday music filled the air as songs like ‘Rockin’ Around the Christmas Tree’ had the gymnasts ‘rockin’ around the mat’ as they did their complex routines.

Then, Bri Rotella ’16 ran towards the middle of the mat, surprising the audience with a solo. The crowds mouths dropped in awe as Rotella showed off her deft moves. Her hair was flipping back and forth as she performed one handspring after another.

“I was really nervous about having all eyes on me, I was afraid I was going to mess me up,” Bri Rotella ’16, a  member of the Showtime team for nine years said.

“But I didn’t mess up, which made me feel really good,” Rotella finished saying.

The show came towards a wrap as the lights dimmed, and the gymnasts were no where to be found.

Just as some family members were getting ready to leave, boom! The gymnasts surprised the audience once again, as they ran onto the mats with vibrant colored red and green glowsticks linked around their wrists.

“I thought it was time to go!” Susan Kantor, a team member’s mom said. “Just as I was about to leave, I saw the girls run to the middle of the mat, then I figured out it wasn’t actually over,” she concluded.

They kept the night young and danced with the lights dimmed to Jingle Bell Rock; the glowsticks painting pictures in the air.

There were a few changes made to this year’s holiday show that made it different from the last, and definitely one to remember.

“It was the first time we performed in our new location which was really fun, and also in one of the numbers, the group combined with the advanced team and pre team which,” Abby Turner ’16  member of the YMCA Showtime team said.