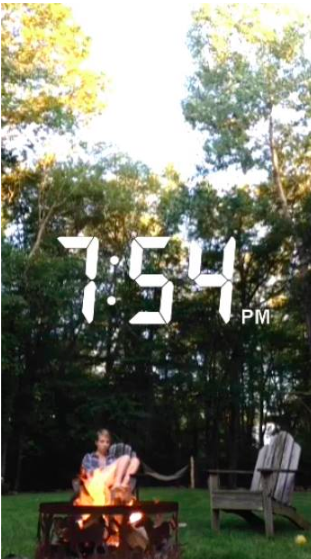 There is a social media revolution erupting within our own school grounds.  Tova Byrne ’15 has turned the simple action of making a snapchat story into a platform in which she can document her daily routine, while exploring dynamic cinematography concepts.

If there’s a person attempting to duct tape their phone to the ceiling, or nearly risking their life trying to record a seemingly average object or situation at a bizarre angle, you can almost bet it is Byrne, who describes her tactics of recording to be of a guerilla standard.

Byrne has taken it upon herself to turn an absolutely ordinary app into something she can use to create the extraordinary.

If you’re unfamiliar with these snapchat stories, they document various aspects of Byrne’s day from obscure angles–whether it be lying in bed doing homework, or more commonly, watching “It’s Always Sunny in Philadelphia” at 2 o’clock in the morning.

“Most of my snapchats are of the mundane,” Byrne said.

Byrne wanted to step away from the typical 900 second stories that consist of red solo cups at a party, or selfies captioned “my bestiez.”

“On Saturday nights, my snapchat story feed is usually all of people with their friends, usually out at a party,” Colleen Bannon ’17 said.

Byrne ’15 makes a conscious effort to stray from this norm.

“I wanted to try to document what snapchat stories usually don’t: the kind of down time in your life,” Byrne said, “They’re not necessarily exciting, they’re just different.”

Byrne started her unique approach to making snapchat stories because of her fascination with what people do when nobody’s watching.

“Instead of making stories when she’s with other people, Tova takes a totally different approach,” Sam Kratky ’15 said.  “She broadcasts what she does when she is alone.”

“The stories are like humanity on demand,” Byrne said.

Byrne’s snapchat epicness can not only be credited to her passion for video making and her desire to go to film school, but it can also be traced back to her first social media love, Vine. The production value of the vines of Reno Shaw and Hazelst stood out to her, but she was immediately inspired by Tom Shea, or affectionately called “Tommy” by Byrne.

“He created an entire story over the course of months in 6-second, third person vignettes,” Byrne explained.

Her immediate reaction was not to laugh, rewatch, or close the app, but to rather let his creativity inspire her own.

“I was like, oh wow, people are doing really cool things with social media now,” Byrne said, “so I thought, okay, I have this huge love for Snapchat, I always have.”

So what did Byrne do?

“I thought, okay let’s ramp this up,” Byrne said.

And that’s how Byrne’s quirky and original snapchat stories were born.

“I decided to make a bizarre statement on a soapbox and see how it went.”