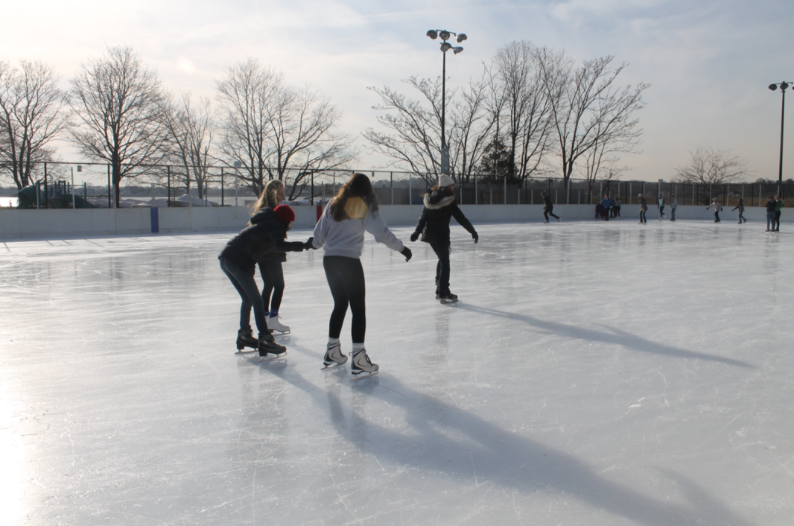 With colorful coats hugging their warm bodies and wool hats stretching to cover the tips of their red ears, Westport residents laced up their ice skates at Longshore on Saturday to kick off the rink’s winter season.

Clinging onto the side of the rink and playing with his gloves, Jasper Burke ’21, a frequent Longshore skater, said he’s loved putting on a pair of skates ever since he was little.

“I like the way the wind feels rushing to my face when I go fast,” Burke said, before taking off in the other direction.

Tony Lantier, owner of Thin Ice Management and operator of the rink, greeted old and new friends through the skate rental window. This past month he’s been busy smoothing out the rink’s surface in preparation for the ice.
“Usually we don’t start building the ice until this week, but last week it got really cold, so I figured, might as well open early,” Lantier said.
Abby Straight ’20, skating with her sister and a few friends, said in addition to drinking a cup of cocoa and munching on a warm funnel cake at Joey’s, she really wanted to come on opening day to see how the rink was expanded.

Since Longshore is hosting four Staples hockey games this winter, the rink was forced to add 15 feet to fit FCIAC standards. The sound system was also revamped to include a PA system for game announcements, according to Lantier.

Saturday’s skaters all seemed to appreciate having a little extra room to dig their skates into and said they look forward to returning.

On Dec. 12th the Wreckers will take on Norwalk in the War at the Shore preseason game. Staples Superfans are expected to make an appearance. For other hours of operation, visit http://www.wpalrink.com/.