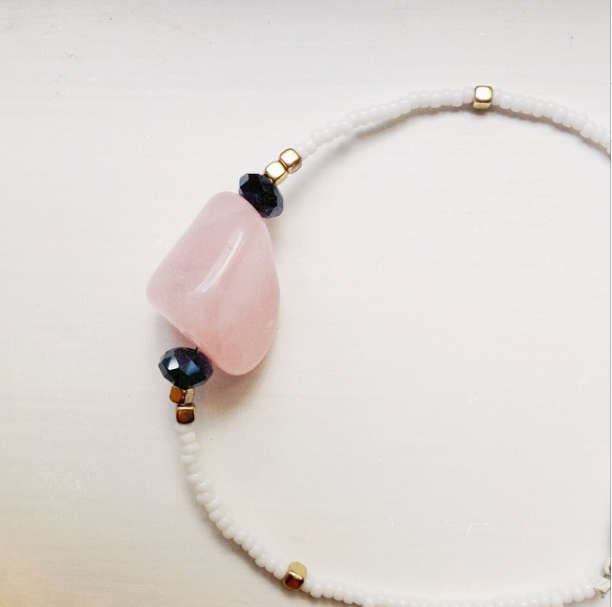 Girls who grew up in the early 2000’s may recall some of the era’s popular fashion statements being quite the head turner; and not in a good way. To name a few, there was the infamous poncho, clunky clogs, and tinted colored sunglasses. A staple piece was the ‘choker’ necklace, which is now making a prominent comeback in the Staples hallways.

It’s hard to miss the many necklaces layered on girls necks, as the senior girls have begun a trend of designing, crafting, and then wearing and selling their own personal pieces.

Noa Wind ’15 and Courtney Brockwell ’15 have collectively sold their creations as a team and are having nothing but success.

“It started just as a fun activity for the both of us,” Wind said. “We immediately got positive reactions from our friends asking us to make specific designs for them. We were so surprised by how much attention they were getting.”

The duo quickly saw potential in their work and decided to make an Instagram account (@strung.by.cn) where they posted images of necklaces they made that were for sale. Less than 24 hours from the first post, they had about 25 orders and over 100 followers eager to flaunt a custom necklace.

“I’ve never really considered myself to be skilled in jewelry making,” Brockwell said. “I’ve been watching my grandmother for years design her own jewelry, which is where I picked it up from, and now I just can’t seem to stop.”

Wind and Brockwell aren’t the only ones receiving recognition. Meg Fay ’15, a close friend of the pair, has designed her own collection and Instagram account called “@goldndesigns,” which carries handmade bracelets, necklaces and rings.

Initially, Fay started with a few basic designs for herself and friends as a hobby over the summer.

Fay describes herself as being drawn to jewelry that has a dainty feel.

“I try to have a simplistic style come across in my pieces because that’s just how I am personally,” she said. “It’s very tedious work but well worth it in the end.”

All three girls are working hard and are glad to see others take interest in their projects. Students interested in their jewelry can contact their Instagram accounts for details.