When favorite chains are nowhere to be found in college 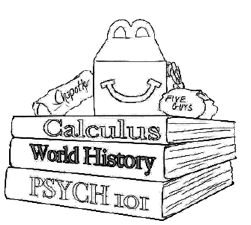 When it comes to picking a college, it’s important to use your head, go with your gut, and listen to your heart.

But what about your stomach?

There are so many factors to consider during the college process: location, size, diversity, etc. It takes a lot of brainpower to narrow down a list of over 4,000 schools to just 10-15. Maybe it is time to give our noggins a break and let our tongues do the talking—pun absolutely intended.

Chain restaurants are a gift to mankind; their food is fast, flavorful and fun. They’re also just about everywhere: many fan favorites are right here in Westport.

But what happens when your favorite fast food isn’t right down the street?

The Staples senior class is all about college right now. Many students have already made their decision about where they will be heading this fall and for some, it will be a fairly long trip.

“There’s nothing better than a nice burger from McDeezys or Five Guys,” said Andrew Marriott ’14, who will be heading to Nashville, TN this fall to attend Vanderbilt University. He sincerely hopes one of the two will be close in case of cravings.

While Marriott is in luck with both his burger joints (there are 11 McDonald’s and two Five Guys within a five mile radius of campus), others are not so fortunate.

Griffin Noyer ’14 will be trekking all the way to Colorado College, and his caffeine fix may take a hit.

“They don’t have a lot of Dunkin Donuts’, which is whacksauce,” Noyer said. “And I only realized how much I’ll miss it now that I won’t have it.”

Fortunately for Noyer, CC has two coffee shops of its own, Colorado Coffee and the Chas Coffee Cart, as well as five Starbucks and over 20 cafés within a five mile radius.

But after all, college is a learning and growing experience, and it’s important to keep an open mind.

Juniors currently looking at schools have stated that, at least for the moment, food is not one of their deciding factors.

“I don’t think food is as important as other aspects of college like location, size, and the quality of education,” said Diyab Khan ‘15.

But even seniors whose previous haunts won’t be as available to them are keeping in good spirits.

Robby Gershowitz ‘14 will journey to Atlanta, GA to attend Emory University, where he may have to hunt for some alternatives. A lunchtime burrito may have to come from Moe’s Southwest Grill rather than Chipotle; a craving for a chicken sandwich may mean a trip to Chick-fil-a instead of Wendy’s.

Gershowitz is making the best of the situation. “I am interested in trying some new southern chains that I have never eaten at before,” he said.