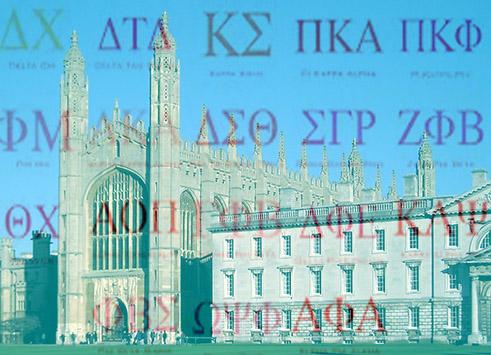 For the senior class, college is right around the corner and it’s one of the most pivotal points in a student’s life.

There are so many factors that make up the perfect college experience, such as the classroom settings, extracurricular activities, meeting new people, and honing new skills in your field of study.

However, there is another aspect that has become a prevalent trend in the United States when students get their first taste of college: fraternities and sororities.

“I joined a sorority because at Staples, I loved being a part of a group on a sports team, so I thought joining would be an awesome way to meet new girls that had similar goals and personalities to me,” Claire O’Halloran ‘13 said.

O’Halloran also added that being a part of a group is not only a way to expand the network of people you know, but it makes college feel like a small and more connected world.

“Greek life is extremely popular. You see the pride all around campus with students wearing the letters of their Greek association. Personally, I rock the letters of Delta Tau Delta,” Masyn Szeliga, a freshman at Sacred Heart University, said.

Even though these groups are socially inclined, the process of becoming an official member is quite a strenuous one.

According to Brian Fong ’11, “My pledge-ship required me to attend pledge class where we’d learn about the fraternity’s values and history. Throughout the process, there are certain rituals that every fraternity man or sorority woman must take part in. At the end of the process, we had to take a written exam and after you passed, then the brothers would decide if they wanted to initiate you.”

Clearly, being accepted as a brother or sister is taken very seriously.

“The rush process was extremely draining because you have 500 girls that are trying to stand out to certain sororities,” said O’Halloran. “On top of that, it can definitely be frustrating if a sorority ‘drops’ you (doesn’t ask you back to the next days’ round).  But in the end, most people end up extremely happy with the sorority they end up in.”

A benefit of being in a fraternity or a sorority is that they provide social activities for the school, especially since  both groups stress the idea of leadership.

“Besides offering a close knit family of brothers, we participate in local charity events and raise awareness for certain causes,” Szeliga said.

Ultimately, if you’re thinking about joining a fraternity or sorority, it can be very rewarding because of the everlasting connections you make and the contributions you bring to the school community.