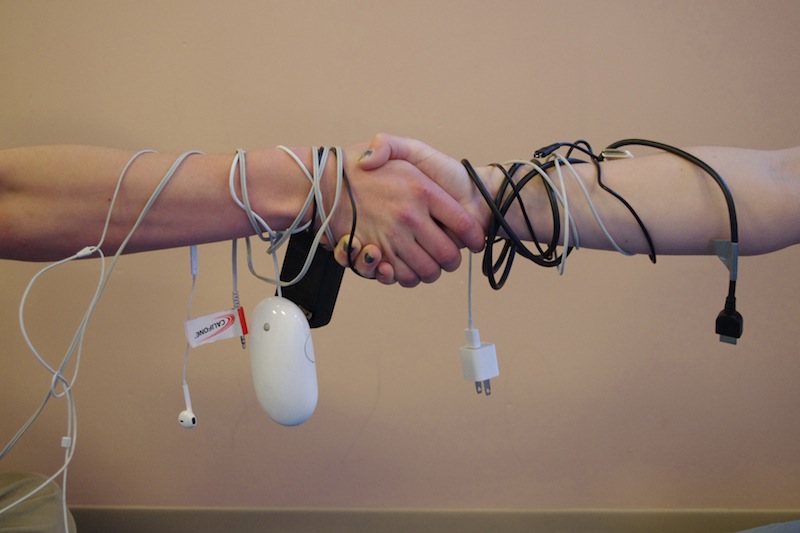 Sarah Bookbinder ’16 walks out of Bow Tie Royale 6, laughing and chatting with her friend about Catching Fire, the box office-topping blockbuster that they just watched. The discussion moves on to Urban Outfitters and Madewell, and the girls make plans to visit them on another day. They hop into the car, discussing what to munch on for lunch.

It’s hard to believe that Bookbinder met this close friend of hers through technology, and only later met in person in early 2013.

“It’s weird that we met through Snapchat because we’re so close now,” Bookbinder said. Daisy Laska ’16 introduced Bookbinder to her new friend in a Snapchat, forming what Bookbinder considers a real friendship.

This is not atypical at Staples. Social networking platforms such as Tumblr, Twitter, Snapchat, and Instagram can now ease the formation of new friendships. In fact, according to the report “Social Networking Sites and Our Lives” by Pew Internet, the average internet user has 163 more social ties than the average non-user.

Taylor Jacobs ’14 has also found a real friend through social networking, but in her case the platform was Twitter. When the boyband One Direction visited New York City, Jacobs messaged people in order to find out where the boys were. She has met some of these friends in person, and has become good friends with two of them.

“It’s fun because they don’t judge me for my huge obsession with the boys,” Jacobs said.

Jacobs found friends not just through Twitter but also Tumblr.

“We just started messaging each other one day and became friends,” she said.

Manon de Vos ’16 is another example of a friendship formed through Tumblr. When she followed a new soft grunge blog, she and the owner of the blog, Aisy, started messaging.

“We found out that we both love Urban Outfitters, both watch American Horror Story and are both sophomores in high school,” de Vos said. “Our conversations just kept going. It’s gotten to the point where we would message each other almost every day, and now we even Snapchat.”

Neither de Vos nor Jacobs have met their Tumblr friends in person; however, they both consider their internet friends real friends.

“[We] not only help each other out with Tumblr-related things, but also get to know each other on a personal level,” de Vos said. She helps Aisy out by promoting her blog, making a banner for her Tumblr, helping choose outfits and giving advice about school.

Jacobs said that she and her Tumblr friend have also gone to each other for advice about friends.

However, as much as these friends talk online, they never give away personal information.

“I don’t tell them anything more than ‘I live in Connecticut,’” de Vos said.

At the end of it all, Jacobs and de Vos both still feel that the friends  they know in person are golden compared to behind-the-screen-buddies.

“I will always love my real friends more,” Jacobs said.

“Sometimes it may be harder to relate to your Tumblr friends because they may have gone through [different] experiences,” de Vos said. “You know that your real life friendships are real because they aren’t relationships that were built through typing behind a computer screen.”