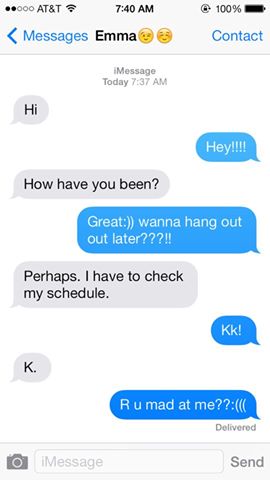 Once upon a time, before smartphones and computers, the period was a neutral form of punctuation that signified a pause between complete sentences. A single exclamation point was a way to express excitement, however two in a row might seem redundant. Using more than one question mark was rarely seen, if ever.

Today, the period’s responsibility as a punctuation mark has grown considerably, as it for some it can signify anger or annoyance. Seeing 10 or 15 exclamation points in a row is not uncommon, and now the use of only one question mark is what’s rarely seen.

The comma makes an occasional appearance in regular everyday texts, but if someone had only ever communicated via texts the existence of a colon or semicolon would be unknown except as the eyes of various winking or smiley faces.

During a time when a conversation over text might be more common than one face to face, punctuation has been redefined to express one’s tone much more blatantly. In the 21st century, people fire off texts almost as soon as the thought pops into their head and it would seem people don’t have time to craft their sentences with the same nuance and tone that Shakespeare does when he uses varied sentence lengths or rhetorical devices.

“Punctuation is extremely important when you text. It can mean the difference between a sassy text and a sad or angry text,” said Rebecca Zlatkin ’15.

Kristen Schultz, an English teacher, picked up on this. Schultz is one of the younger teachers at Staples and, like many of her students, texts often. She is aware of the difference between punctuation in her texts and other forms of writing and incorporated it into her classes.

“I had my sophomore English class take passages from “Romeo and Juliet” and translate it into a modern text conversation,” said Schultz.

Her students used short sentences ended with periods to show anger, or winky faces when Romeo and Juliet were flirting. Instead of one exclamation point, they would use 5 or so to really emphasize the excitement or urgency.

Punctuation has evolved from a seemingly neutral way to clarify the structure of a sentence, to something now seen as an emotion in itself.

“‘K.’ has become the universal symbol of ‘go away,’” said Zlatkin, “as opposed to ‘k’ which generally just means ‘ok.’”

How someone uses (or doesn’t use) punctuation has become another element to be discussed, analyzed, and questioned by boys and girls everywhere as they interact with technology.

“If I’m texting a girl and she starts using short sentences with periods and I stop seeing a million exclamation points or extra letters then I will probably assume something is wrong,” said Brandon Rakowski ’16.

Text messages between the opposite sex are a constant source of confusion for students. A full scale rhetorical analysis can take place on a three letter text. Students can be heard discussing the intended tone or purpose of a text message, spending hours agonizing over whether or not a response of “Hey” meant “Hi, I’m glad we talk and I’m interested in you” or just “Hey, I’m just saying hi because I feel obligated to respond to your previous text but I would prefer it if we stopped talking.”

For some people, the impact of their punctuation doesn’t even cross their mind.

Megan Scheck, another English teacher at Staples, doesn’t bother fretting over whether or not the use of a period will come across as angry. Instead, she’s just in the habit of using proper punctuation.

“I don’t know if it’s because I’m older or because I’m an English teacher and my mind is broken when it comes to things like grammar,” said Scheck.

A quick scroll through some of her texts and it’s clear they are the predictable texts of an English teacher with proper punctuation, spelling, and grammar; she even noted the use of a colon.

It’s not just English teachers or older generations to whom the idea of ‘texting punctuation’ is disregarded. Michelle Gurevich ’14 simply doesn’t care. The idea that someone might be over analyzing her texts is not something she worries about.

“My grammar is actually atrocious when I text,” said Gurevich, to which she added smiling slightly, “I’m just really lazy and don’t feel like putting in the extra effort to clarify my intended message.”

As Rakowski explained, punctuation is language’s way of helping the reader understand the meaning behind the words. As generations become more accustomed to texting, people will continue attempting to clarify their meaning so that nothing can be misinterpreted.

“In texting, that’s [punctuation] extremely important, maybe even more so than in an English paper. When you text you’re talking to real people who make real mistakes in interpreting what you say,” said Rakowski,  “At least in an English paper you’re keeping a consistent academic tone, on a phone your tone can change in a split second and punctuation is extremely helpful for the person on the other end to understand that.”