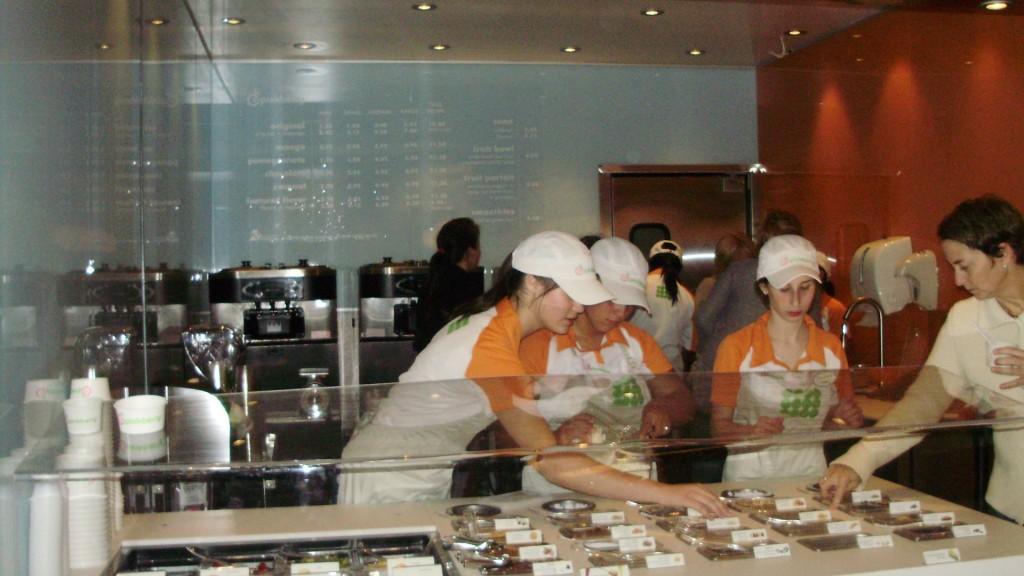 Residents of Westport are very lucky to have more than one popular frozen yogurt store in town.

Top This is on Main Street and has been around for three years. Many staples students to visit after a walk with a friend downtown to get some fresh, cold yogurt before moving on with daily tasks.

Recently, the news that Pinkberry is moving into town has been widespread, and everyone can’t wait for it to open on October 14th. Pinkberry is currently in Fairfield and it is only five minutes away from Westport.

Even with the added competition of Pinkberry, the business of Top This may end up just being the same…

Well, although Top This and Pinkberry may be similar, there are many differences.

“I like ice cream better than yogurt and because of that, I had a bad experience at Pinkberry,” Sterling Price ’14 said.

According to students, the yogurt at Top This is not very tart, and it is also a little thicker than Pinkberry. You can also put as much as you want in the cup, and you can mix up the flavors.

So far, it looks like Top This is on “top” of things, but Pinkberry has some opportunities.

“I like Pinkberry better than Top This because at Pinkberry, the original tart is more refreshing and intense. I also think that the setup is cool because of the stone floors,” Sarah Herbsman ’15 said.

Pinkberry also provides greater variety of toppings and servers put them on for you..

But there is a special factor in Top This that Pinkberry does not offer and is significantly different from all the other yogurt stores.

“For Top This being a little more expensive, it is still so successful because so many kids go their and they like the experience of putting the toppings on by themselves,” Farnen ‘14 said.

It turns out there is even a third party in this yogurt battle. “While Top This and Pinkberry are great places to get frozen yogurt,I’d say that Froyo World tops them both. The flavors are better, and there is a wider variety of both yogurt and toppings,” Kevin Coughlin’13 said.

Froyo World is another frozen yogurt store that is right on the Westport-Norwalk border, which is close to John’s Best and of course, the movie theatre.

“We have 45 toppings and a ton of different flavors come every month, Kristen Dionne said.They are not your typical flavors and when I am not working, I am still addicted to Froyo.”

Go out and get a taste to see which one is your flavor and let us know which one you prefer.