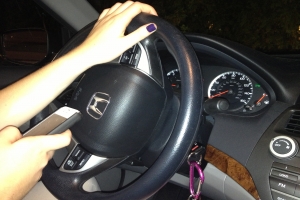 As you pull up to a stop sign, your phone lights because there is a text message from your best friend. Then it buzzes, and buzzes again. It becomes so much more tempting to open it, but you know it’s simply not worth it. As texting has become a major part of our culture, it has also become a major problem on our streets.

Connecticut law states that all drivers are prohibited from using hand held cell phones while driving, and drivers younger than 18 are not allowed to use a cell phone at all, even it if is hands free.

Because texting has become such a prominent issue, a separate law was passed in the state that prohibits drivers from texting, which includes typing, sending, or reading a text message with a hand held phone or mobile device.

To some, answering a text message at a stop sign or traffic light may seem like no big deal but if the police catch you, you can be fined $100 the first time, $150 the second time, or $200 for repeat offense. But, because teenagers are new to the road, if they are ticketed for texting while driving, they will have to pay a larger fee. In addition, they will also have their license suspended for 30 days the first time and up to 6 months the second time.

Cornella Gallo, a psychiatrist in Westport stated that it is even harder for teens to text and drive at the same time because their brains are still developing. Driving is a very complex task. Many different parts of the brain are working together in order to control arms and legs as well as pay attention. Adding another factor for the brain to manage would just be a distraction.

“A teen who is texting thinks they are paying just as much attention to the road and thinks they can handle just as much,” said Gallo, “But they can’t, any distraction is more likely to take away from the driver’s focus.”

Annie Cooperstone ’13 thinks that texting and driving is way too common. She mostly sees it occurring at a stoplight or stuck in traffic.

“Texting and driving is extremely dumb,” said Cooperstone, “There is nothing that cant wait until you pull over, and it causes way to many accidents.”

The answer to texting and driving is simply don’t do it. If someone texts you as you are putting the keys into the car, just reply by saying “Sorry can’t talk – driving.”