Families Unite: Teachers And Their Kids Walk the Same Halls 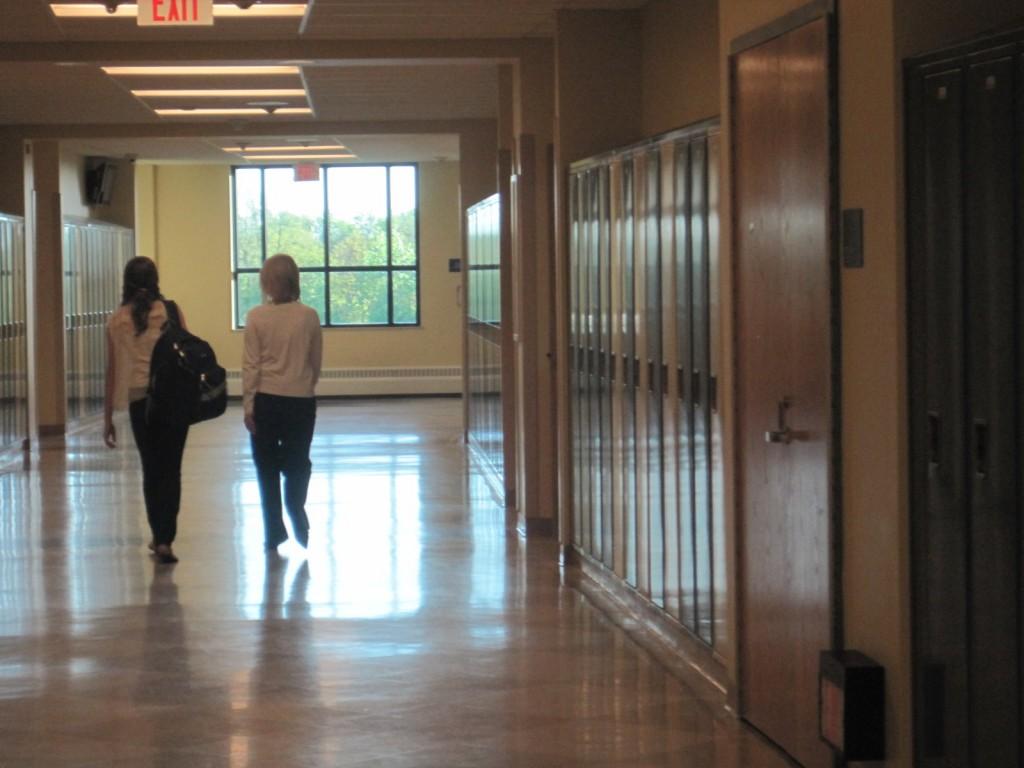 Seven a.m.—Katelyn Farnen ’14 walks into Staples High School with her textbook-filled bag on her back and her dad, Assistant Principal James Farnen, by her side. Katelyn is one of approximately six students who has a parent that calls Staples their workplace.

Katelyn, who is new to Staples this year, said that having her father work at her school has made her transition much easier. “The pros are that he’s always there for me if I need anything,” she said. “Whether it’s lunch money or a ride home, he’s always looking out for me, which really means a lot.”

Farnen said that he loves sharing Staples with his daughter. “Staples is such a wonderful school, and I am happy that she wanted to come here and that she is able to enjoy a learning environment that is so special,” he said. Farnen went on to say that while he rarely sees Katelyn during the day, “It is nice when I do, either to chat for a second or to tell her good luck prior to a game or a big test.”

According to Katelyn, having an AP as a father does not come without its share of funny situations. “When we had the Japanese drumming assembly my dad had to get up in front of everyone and quiet them down. I just remember the whole auditorium clapping for him and everyone sitting around me stared at me when he did, so it was weird thinking ‘that’s my dad,’” she said.

She also added that it was strange to watch her father be interviewed on “Good Morning Staples.” “It was weird sitting in class and watching him on the screen as an Assistant Principal and not as my dad,” she said.

Katelyn said that there are a few negative aspects to having a parent work at Staples. “He can find out my grades before I do, which could be good or really bad,” she said. “People also have made jokes about me being favored by teachers, which get’s pretty annoying, but overall, my experience with him being at school with me has been very positive.”

Farnen agrees that while he is extremely happy to have Katelyn at Staples, there are a few downsides. “I want her to experience high school without any additional attention or pressure that comes with being a young woman in high school. Having her dad as an AP in the school will unfortunately increase both of those,” he said. “Katie and I both knew this was the case prior to her making the decision to transfer to Staples and it comes with the territory.”

Ann Didelot, a Staples math teacher, can relate to Farnen’s situation as her daughter, Sarah Malanoski ’13, attends Staples. Didelot says that working at her daughter’s school can sometimes cause an overlap between her schedules as a mother and as a teacher. “Working at Sarah’s school can be a bit of a disadvantage because during Back to School night I don’t get to meet Sarah’s teachers, but I still love being here for the kids in my classes,” she said.

Didelot claims that working at Staples not only affects her daughter, but it can both help and hinder her correspondence with Malanoski’s teachers.

“It’s an advantage that I have easy communication with them, but to some degree it’s harder because I’m working the same hours that they are,” she said.

Malanoski said that having Didelot at Staples is surprisingly convenient.

“If I ever mess up, like a late permission slip or I need her to talk to a teacher, she’s there. I can go to her whenever I need her,” she said.

Malanoski also said that there are certain advantages of having a parent who is a teacher. “There’s always those little perks that you would never think of. For example, getting driven to school with prime parking in the staff lot when I was a freshman and sophomore,” she said.

Similar to Katelyn Farnen, Malanoski can remember a few funny situations that involved her mom. “One really awkward situation was when I was a freshman and my mom subbed for the class. I had no idea how to handle myself. We acted completely normal, and most people did not even know we were related, as we go by different last names, so nothing major happened. She did however, come over to tell me, ‘Pick your brother up from the bus,’ while pretending to help me with a worksheet,” she said.

Didelot claims that the most important part about being a teacher at Malanoski’s school is keeping a distinction between her personal and professional life. “I’ve taught a lot of Sarah’s friends and they have slept over at our house,” she said, “And depending on the person, it makes some students feel comfortable and some uncomfortable because I know them outside of the classroom.”

Didelot says that being a teacher at Staples is relatively easy. “Staples students are very respectful students and they know where the boundaries are,” she said. These boundaries, however, exclude the occasional math-question texts that Malanoski receives from her friends and passes on to her mother.