A Tale of Two Towns: How does Westport’s downtown nightlife compare to that of neighboring Fairfield? 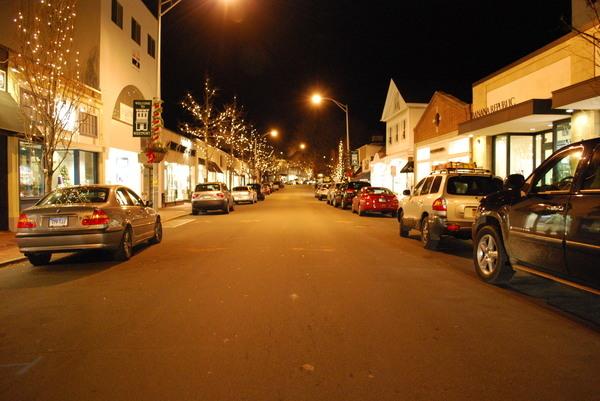 It’s a Friday night in Westport and a student is looking for something to do. His or her friends want to go out, but don’t have any plans in mind. They decide to go downtown, but once they get there, they can’t find much else to do besides for eating at a few restaurants and indulging in ice cream.

This is the reality that many Staples students face who choose downtown Westport as a source of entertainment.

Downtown Westport has a few restaurants, a few ice cream parlors, many clothing shops, and a YMCA – but students feel there are not many fun opportunities available downtown.

“There is not much to do besides for shop,” Caela McCann ’11 said. “I only go downtown for dinner and ice cream.”

“I love downtown Fairfield because there is a lot going on,” said Haley Wolf ’11 of Fairfield Warde High School.  “There are not only wonderful restaurants, but there is also a movie theater right in the center of downtown.”

It’s for these reasons students find downtown Fairfield entertaining. Students of Westport, however, feel differently about their downtown–and they are not alone.

Many adults feel that Westport doesn’t suit their needs in terms of entertainment. As a result, many adults find themselves spending their Friday nights in towns like Fairfield or South Norwalk.

Dan Woog, Westport historian, member of the Westport Youth Commission (WYC) and Staples boys’ soccer coach, has produced published work about the town of Westport. He has not only written about its changes over time, but has also experienced them firshand.

“Fairfield is much like what Westport was like 30 years ago,” Woog said. “[Fairfield] has lively restaurants, bars and clubs that attract college students, has a movie theater and overall has a much more of an exciting nightlife than Westport.”

According to Woog, Westport used to have these types of attractions–but they were replaced by clothing stores.

“Westport used to be lively like Fairfield because everything was in one central location,” Woog said. “Everything was ‘walkable’–you had a movie theater, restaurants, and ice cream parlors all in the same area. Its layout drew many people to downtown Westport in ways that todays layout does not.”

The changes to downtown Westport were a result of zoning regulations. Currently, there is a strict rule stating how close restaurants can be that serve alcohol. According to Woog, this is why there are not any restaurants lined up against each other on main street, in ways that they are in Fairfield. Fairfield’s zoning regulations are not as strict as those of Westport.

However, Westport’s zoning regulations are currently being revised – regulations that can potentially change the potential of downtown Westport.

Changes to downtown Westport have been emphasized by the WYC  so much so that according to WYC Co-Chair Neva Sanflippo ’11, it created a new committee specifically focused on revitalizing Westport.

The committee’s members, Isaac Stein ’12, Jordan Olson ’12, and Will Bitsky ’12, have expressed concern for the future of downtown Westport and believe that youth movements towards revitalizing it is a key first step.

“I see it as a problem now,” Bitsky said. “But if there is a strong commitment from members of the community, especially in the youth, that maybe in a few years we could have a movie theater and other attractive venues.”

However ironic it may seem, revitalizing Westport to what it was like 30 years ago will bring many benefits to the town. But according to Woog, it all starts with a movie theater.

Although Westport does not currently present the night life entertainment that Fairfield does, the town, specifically through the WYC, is trying to change that–to make Westport an enjoyable, fun, hangout spot for people of all ages.