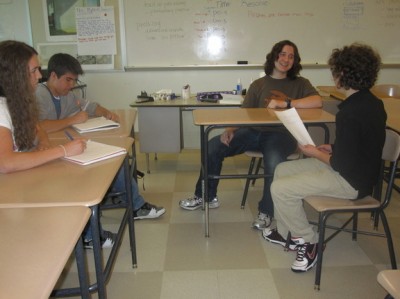 As seniors graduate from high school, they not only say “goodbye” to their teachers and classes, but also to the clubs that they started or joined. In preparation for the school year of 2010-11, senior club advisors are officially turning over their leadership positions to the incoming year’s staff; the Staples Debate Team and Frisbee Club are no exceptions.

While The Staples Debate Team’s student presidents head off to college, its new leaders are already on their way to a successful year. Although current Presidents Jason Gandelman ’10 and Jordan Ratner ’10 are turning over their positions, Emily Harris ’11 and Jeremy Rubel ’11 are ready to take on the challenges at the helm.

In explaining the impact that the senior advisors had on him this year, Jacob Meisel ’13 explained how “the seniors were extremely helpful. They would watch the underclassmen debate, write down notes, and then explain what we could improve and exactly what the judges were looking for.”

Yet with a new staff next year, some elements of the team are bound to change. According to Harris, “The team’s dynamic changes every year, whether it be by strengthening or weakening it. The seniors will be missed, but the underclassmen have integrated themselves really well.”

While Harris enjoys “thinking on her feet and discussing ideas thoroughly to explore different aspects of an issue,” other aspects of the team excite Vinny Amaru ’11.

“I first joined because I like to argue; the team provides a fun way to do that with people who are unable to dismiss me,” said Amaru. He continued how upon return of a debate tournament, he “feels the comradery of the team, and the morals are very high.”

With international competitions hosted at Harvard, Yale, Columbia, and other Ivy League Schools, the Staples team diligently prepares in advance. During its weekly Tuesday meetings, the members discuss different forms of debating, and help each other improve their own methods. Prior to the actual debate, members also must do extensive research for both sides of an argument, then write speeches for the pros and cons. The side that the team will argue is kept a secret until they actually arrive at the conference.

Less formal tournaments are held at a casual level, which require substantially less preparation. The topic of debate is not announced until the day of the event, so the team is unable to research in advance. But, Jacob Meisel ’13 explained these types of debate as “more fun, yet less intense.” The team is given exactly one hour to examine and research the topic, then must argue for one side of the issue.

According to Rubel, he wants to “expand the size of the club,” and “get people more involved in going to debate tournaments in the future.” Meisel agreed, and added that throughout the next few years on the team, he hopes to attend more national debates and establish a team at Bedford Middle School.

Amaru hinted that the team might hold a public debate in the school’s library in order to encourage shy people and underclassmen to attend the meetings and become members of the group.

Yet, the team is currently searching for a new teacher advisor for the school year of 2010-11.

The Staples Ultimate Frisbee Club has also officially created a new advisory board. Four-year member and President Chris Sledge ’10 is passing on his title to Timothy Yang ’11 and Curtis Chen ’11.

According to Sledge, his greatest achievement as president this past year was organizing a tournament. The current Staples team reunited with the founding team that was established in the 1970s, for a fun-loving competition.

Yet, Sledge’s biggest struggle was obtaining more members for the club. He hopes that next year, the seniors will be able to entice more players to join the team and play “a more active role” as leaders than he did. Sledge encourages them to “stay with it” because it’s an “enjoyable” after-school activity.

Yang hopes that in the future, the team will be able to compete. “Eventually, we would like to play against other schools for scrimmaging,” said Yang. He furthered how “If you love to play Frisbee, then the team will be a lot of fun. New members are always welcome.”

Chen agreed with Yang, stating that “more people should get involved.” Initially, Chen joined because he wanted “to get together with friends. The club provided a healthy way to have fun and enjoy time after school.”

The transition from senior student advisors to incoming ones is moving along smoothly thus far. Although high standards are expected for next year’s teams, new presidents should have no problem achieving their goals for the Debate Team and the Frisbee Club.