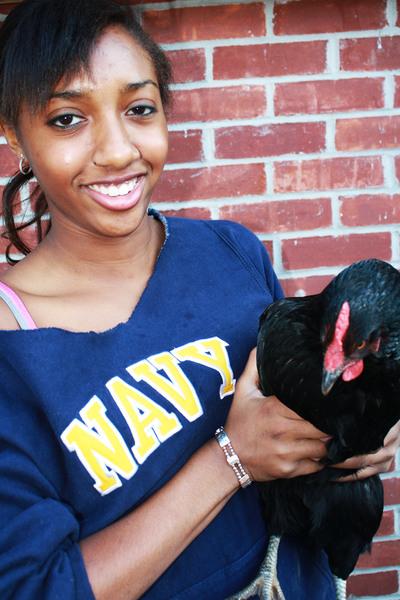 Briyana Theordore '12 embraces a chicken that her and her family have raised. | Photo by Lucas Hammerman

When attending a dinner party, bringing a gift for the host is a common and polite gesture. Guests will often bring their host flowers or a scented candle.

When Charlotte Smith’s ’12 family attends a gathering, they bring fresh eggs produced from their very own chickens.

Five years ago, the Smith family added somewhat unusual pets to their family when they made the decision to purchase five chickens.

“I really wanted a duck when I was in fourth grade, but you need a pond to have ducks,” Smith said, “so my dad suggested chickens because they are useful since you can use the eggs.”

Since then, the chickens have proven to be great pets.

Briyana Theodore ’12, also owns chickens. Blackie, Izzy, Daisy, Sunshine, Speckles, and Scarlet reside in the coop the Theodores have outside their home.

For the Theodores, the thought of raising chickens was first sparked by their interest in a certain breed of dog, the Maremma Sheepdog. Theodore’s mother had the desire to raise this type of dog after seeing one at the humane society and falling in love with its beauty.

“We wanted Maremma Sheepdogs, but they are dogs that are meant to guard livestock, so we needed to have livestock in order to have the dogs,” said Theodore.

Romeo and Juliet, the two sheepdogs, became a part of the Theodore family, and soon after came the six chickens.

Additionally, due to the chickens’ instinctive nature to return to the coop at sunset, the Theodores allow them to run around the yard freely in the evenings.

“They go into the neighbors’ yard sometimes, but our neighbors don’t mind, we let them just run around as long as they don’t go into the street,” said Theodore.

Besides producing their own eggs, having chickens provides the opportunity for other eco-friendly advantages as well. The Smiths are able to use the waste for compost.

“When the coop gets dirty we just add some more woodchips, until we clean the entire coop about twice a year. Then we use it for compost, and we have a little garden patch next to the coop where we use the soil,” said Smith.

The chickens furnish constructive opportunities like composting, but they also present the slight problem of what to do with all the eggs. The Smiths get four eggs each day from their chickens, while the Theodore’s chickens lay six each day.

“The eggs overflow in our refrigerator. My mom gives eggs to anyone who comes over because we always have so many. Having chickens had a good impact on my diet though, because I eat more eggs and get so much protein now,” said Theodore.

Charlotte Weber ’12 who used to have chickens, but no longer does, also enjoyed their fresh eggs.

“We had the chickens because my mother had them growing up in New Jersey, and we liked having the fresh eggs,” said Weber.

Smith pointed out that the fresh eggs their chickens lay often last longer than store bought eggs, and they are also healthier.

“The ones you get in the store may have already been there for two or three weeks. Our fresh eggs are also healthier; the yokes are brighter and fresher,” said Smith.

The chickens are economical pets as well.

“We have not had to buy eggs from the supermarket for two years, so we have definitely saved some money,” Theodore said.

Although it is somewhat of a rarity to own a chicken farm in Westport, those like Theodore, Smith, and Weber have discovered the chickens’ many benefits like saving money and developing eco-friendly habits.

All of this has proven the egg-cellence chickens can have as pets.