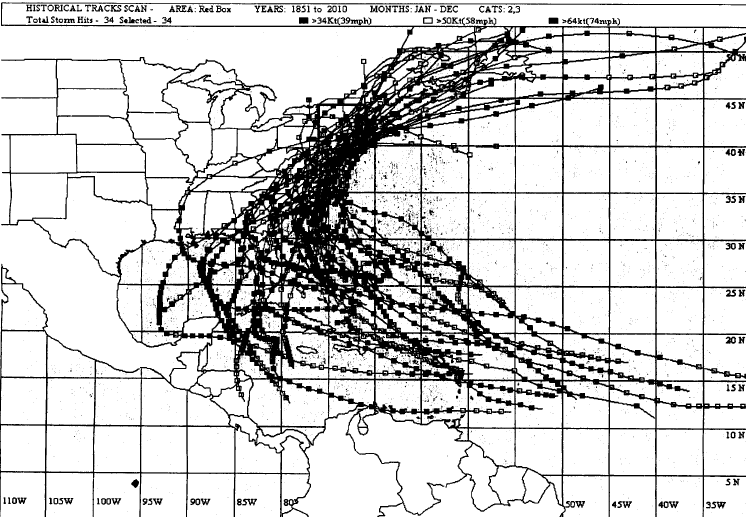 The Westport Fire Department has software that can track hurricanes that have hit Westport in years past. 34 category three or greater hurricanes have reached Westport's beaches since 1900. | Photo Courtesy of SXC

From the early 1950’s through the late 1970’s, the town of Westport was a classic American defensive hotbed in an era in which public opinion was that a looming thermonuclear war with the Soviet Union was just a press of a button away.

Equipped with Nike anti-aircraft defense systems and several decked-out public fallout shelters, Westport was prepared for the worst. However, since the conclusion of the Cold War and the decommissioning of the public shelters, privately owned nuclear bomb shelters are now back in fashion.

Jonathan Gottfried, Deputy Chief of the Westport Fire Department, could understand why Westport is somewhat of a larger target than any other American town, due to its affluence and the fact that it is in the holding pattern of three major airports: LaGuardia, John F. Kennedy, and White Plains.

However, Gottfried believes that privately owned nuclear shelters are largely irrelevant.
“The risk of nuclear war, in comparison to that of a natural disaster or domestic terrorism, is so small that it doesn’t make sense to own a bomb shelter,” said Gottfried.

Instead, Gottfried advises that the citizens of Westport be prepared for a natural disaster, as 34 category three (at origin) hurricanes have hit the town in the past 160 years. The last major hurricane to hit Westport was Hurricane Gloria in 1985, which caused $900 million ($1.8 billion adjusted for inflation) in damage to the East coast.

Gottfried, a member of a group of Fire Department staff that oversees the production of the town’s master emergency plan, cites the threat of hurricanes as the town’s paramount concern.

“Be somewhat prepared. A lot of [Westport citizens] think we can help them right away, but tasks like restoring the electrical grid take a lot of time. I would suggest keeping a radio, flashlights, and a couple of days of food and water on hand at all times,” said Gottfried.

Several public shelters, such as Long Lots School, the Westport Senior Center, and Staples High School, are available to all Westport citizens whenever a flood warning is declared.

According to Gottfried, certain shelters have various strengths. For example, Staples has four backup generators that make electrical failure virtually impossible, Long Lots has several beds, and the Senior Center is intended to be the most centrally located. This makes it more accessible to elderly citizens.

Prior to 1979, Emergency planning was carried out by the Westport Police Department. In that time, the same shelters now used for flood relief were used for different purposes.

Though they were not intended to withstand a nuclear blast, the gymnasiums and basements of the Westport public schools doubled as fallout shelters in a catastrophe. Many of these structures still exist, and could be used as fallout shelters, but are equipped with first-aid and hurricane relief technology rather than decontamination equipment.

The Nike anti-aircraft missile system, which existed at the current site of Bedford Middle School, was completely dismantled between 1969 and 1970. Despite the fact that the Soviet threat no longer exists, Gottfried warns citizens to take additional precautionary measures.

One of these steps is reading the town of Westport’s Emergency Preparedness Guide, which can be found at http://www.westportct.gov/agencies/publicsafety/fire/