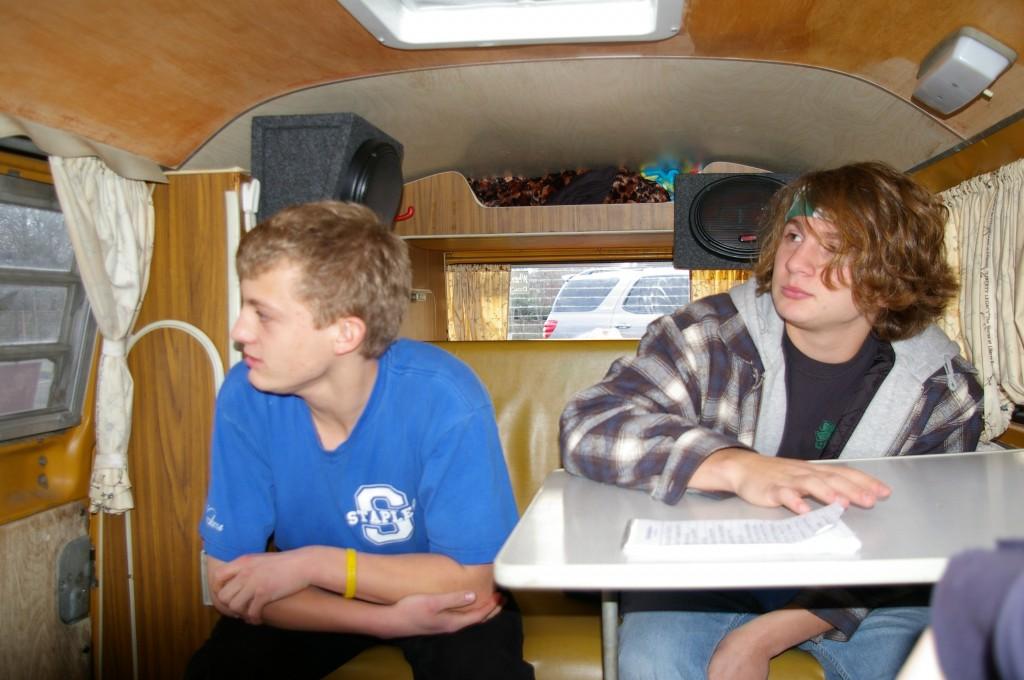 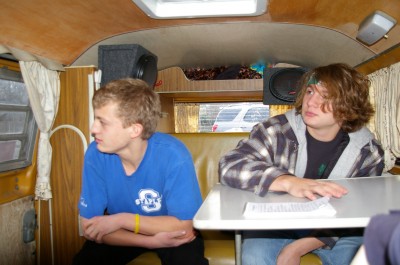 “No use putting that seatbelt on, you’ll die anyway if we crash,” Jared Shavel ’09 warned of his beloved car’s shoddy seatbelts just moments before we prepared to take off for a test run in his 1972 Volkswagen Bus.

The seatbelts barely clicked in all the way, the stick shift goes all the way to the ground, the heat doesn’t work, and the only way for the driver to enter the locked car is through the passenger side.

These are some of the flaws, but in a way idiosyncrasies, that make “The Van” one of the most recognized cars on the Staples campus.

Shavel purchased the car about two years ago off of eBay for the small price of $2,000.

“I originally wanted a muscle car but didn’t have the money,” said Shavel, “so I got [The Van] for investment purposes.”

However, buying the car wasn’t the challenge. It was

the ensuing repairs to it that would be the true challenge. In order to make The Van run, Shavel had to rework most of the wiring, tune the engine, put in windshield wipers, and rework the rusty, dented exterior which had been through two accidents.

Shavel has also found a way to modernize The Van. He not only installed a radio, but even an iPod hookup.

Anyone who drives passenger with Shavel won’t be complaining. The back of The Van looks more like a living than the back of a car. This VW Bus was intended to be the original camper. The back includes shag carpeted walls, a table, and even a comfortable sofa which folds out into a bed. Shavel converted a hole in the roof just over the bed into a skylight. Shavel also plans to install a fridge/sink unit that was once one of the many amenities of The Van.

Despite having The Van for over two years, it is far from totally fixed. If you happen to drive in the car on a snowy winter day, a lack of heat should be the least of your worries. Once it hits snows, the tires will usually just spin.

Despite all of the great times Shavel has enjoyed in The Van, he also has many haunted memories of the times when it nearly took on a mind of its own. Recently, Shavel was stuck on the highway for three hours thanks to The Van’s broken fuel gauge.

Shavel remembers most distinctly a December night about a year ago. He was driving home after a swim meet when suddenly a torrential downpour hit North Avenue. The roof was leaking and windshield wipers had yet to be installed. The only way he could see in front of him was by sticking his head out the side window. The weak tires swerved down the curvy road. Luckily, this story had a happy ending. Both Shavel and The Van made it home safely.

With that bittersweet memory in the past, Shavel readies the car for a drive. As I struggled to put my seatbelt on, Shavel commands the struggling engine of the car to “stay running.” The engine roars and a smell of gasoline persists. Like a moment out of “Little Miss Sunshine,” the defunct horn suddenly began to work and wouldn’t stop. The Van goes fast over multiple speed bumps and breathtakingly sharp turns before being put back safely in park at Staples. The site of The Van itself is quite something, but not until I saw it on the road did I understand the true Van experience.

The Van is a testament of a previous era not forgotten that sticks out with today’s modern cars. Proof of this is visible on The Van’s windows, which are decorated with’70s era Grateful Dead and Phish bumper stickers as well as a peace sign and New York Jets bumper sticker most likely purchased within the last year.

It might not be able to survive a blizzard, it might have an exterior of chipped paint, but Shavel continues to love his VW Bus and the reputation it has built for him.

“It’s a big part of my life. If something bad happened to it, I’d probably cry,” Shavel remarked, moments after the bumpy ride came to an end.