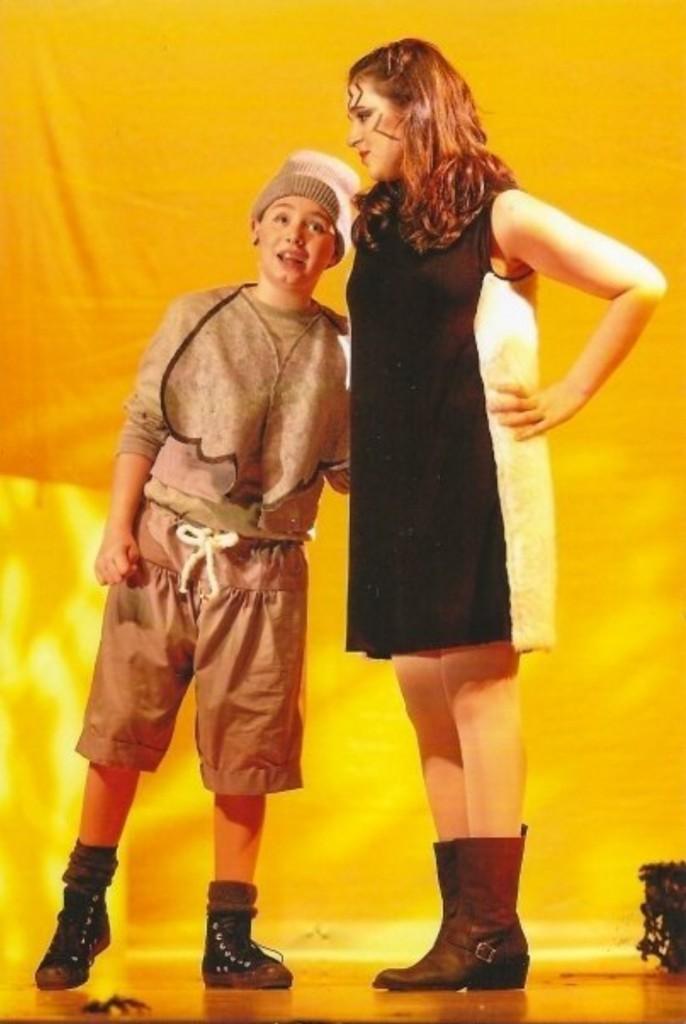 Contributed Photo | Zach Slater ’11 started his acting career at Bedford Middle School, and continued his career by auditioning for the Staples Players production of Beauty and the Beast this fall. In the photo, Slater and Staples student Lauren Jent ’10, sing about friendship in the musical, “Just So Stories.”

Between diving, acting, community service, and school work, freshman Zach Slater has a lot on his plate.

“I have a lot of activities, but I really can’t see giving any of them up,” said Slater. His work plus all of his hobbies keep him busy, but he loves each one for different reason.

One of his greatest passions is acting. Players was the first group Slater joined when arriving at Staples. He had always what a great organization Players was, so he was not at all hesitant to try out for the fall musical, Beauty and the Beast.
“I really loved being part of Beauty and the Beast because I was able to do a great show with so many talented people.”

Though he really enjoyed his experience in the four-building this fall, winter brought out Slater’s other favorite pastime: diving.

“The diving season has been amazing,” said Slater.

His results in competitions have been amazing as well. Slater placed 11th at FCIACS and 23rd at States. A great ranking for any diver, let alone a freshman new to the Staples team.

Slater’s activities extend far beyond Staples. In his spare time, Slater conducts a fundraiser for the Yale Children’s Hospital. Slater invites family and friends to come to Build-A-Bear Workshop once a year to build and donate bears to the children in the ICU.

“I am currently a member of the Jr. Board of Fundraising at the Yale Children’s Hospital,” said Slater, “and it is something I really love because I love helping people.”

Bringing the bears to the children at the hospital is something that brings joy to Slater. His sister Luci Slater, a sixth grader at Bedford, will continue the tradition her brother began by conducting her own Build-A-Bear fundraiser this year.

Within the last three years, Slater has donated 75 bears to the hospital.

Even though Slater is helping people, he has not forgotten about his own dreams.

“I love architecture and I’ve wanted to be an Architect ever since I was little,” said Slater. “I think it is the most important job of any society,” said Slater.

Slater is searching for internships in architecture this spring, in hopes he can stay around Westport and work with the professionals building and designing houses this summer.