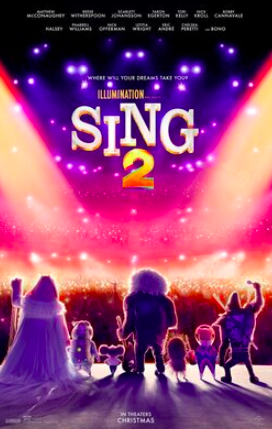 The PG rated sequel "Sing 2" takes on an adventurous plot that is appropriate and intriguing for all ages.

“Sing 2,” the PG rated sequel to the original “Sing” movie from 2016, took on an unexpected plot that had the audience at the edge of their seat at all times. The main protagonist Buster Moon led himself into trouble. He promised the famous singer Clay Calloway at his new “Out of this World” show. Calloway is a lion that went ghost mode for years, because he is on an extended break from his passion of singing due to his wife’s passing.

The series of ‘Sing’ movies incorporates animated animals that portray human-like qualities. In the first ‘Sing,’ Buster Moon perseveres throughout his challenging journey of rebuildinging an amazing theater and finding talented artists to perform at it. Once he has achieved this goal of gathering a group of gifted animals, he takes it to the next level by wanting to make it in Redshore City in ‘Sing 2.’ Redshore City is the equivalent of a Las Vegas, Chicago and Los Angeles type city. Only the best of the best are successful in Redshore City.

The talent agent is unimpressed, and denies them an opportunity to audition in Redshore City. As the persistent group tries to find a way to audition in Redshore City, they are surprisingly accepted by Jimmy Crystal, head of Crystal Entertainment, who then gives them an opportunity to produce their “Out of this World” show under one condition: the promise that famous singer Clay Calloway would perform at his show. Little does Jimmy Crystal know that Buster Moon has absolutely no connection with Clay Calloway and Calloway has been awal since his wife’s passing.

This movie achieved a high quality production that had a sophisticated storyline. While the plot was intricate, it was far from confusing or overwhelming. Watching the characters’ determination to put on this amazing show after all their hard work has a satisfying factor for the audience, as they are also proud of them for overcoming this uphill battle.

The music incorporated throughout this movie adds an entertaining component that attracts the audience to want to watch it again. Hearing songs like “A Sky Full of Stars,” “I Say a Little Prayer,” “Break Free” and many other pop songs makes this movie incredibly fun and engaging.

Overall this movie was incredibly well made by director and writer Garth Jenning and producers Chris Meledrandi and Janet Healy. This movie receives a five out of five stars because I would gladly watch it over again without suggesting any changes.