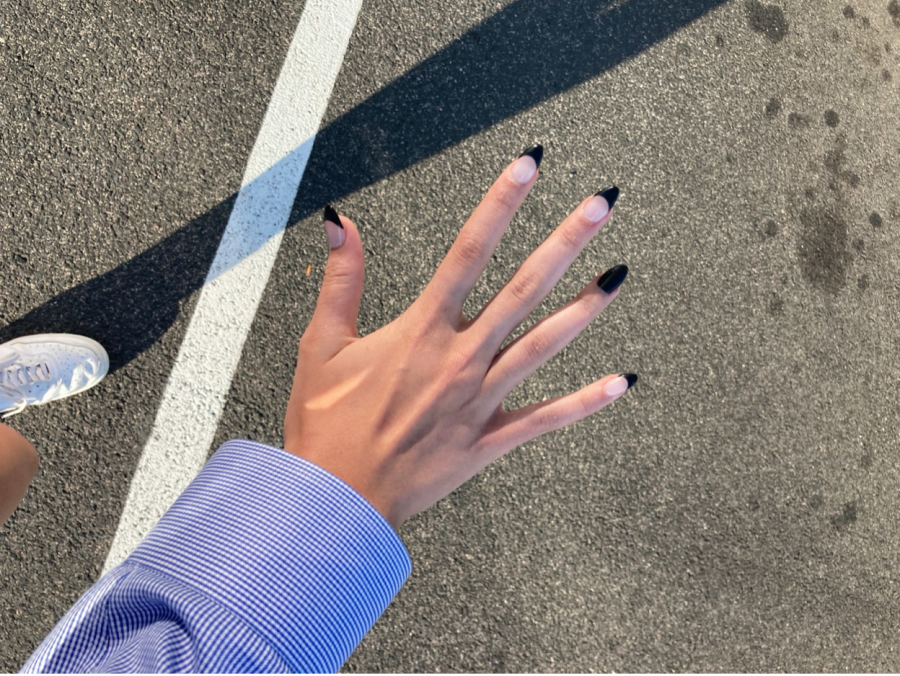 Acrylic nails prove to be fun contributions to one’s fashion at the expense of nail health and one’s savings. Above is a particularly popular acrylic nail design involving almond shaped nails and french tips.

Acrylic nails have become a raging trend, filling teenagers’ Pinterest boards. These fake extensions to one’s nails alter nail shape and length. At first glance, acrylic nails have an appealing aesthetic, but acrylic nails are detrimental to one’s nail health and savings. Acrylic nails shouldn’t be invested in due to the drawbacks.
As a society we strive to recreate the looks of those we are constantly watching on the news, on social media, on the television and in magazines. There are certain lengths we go to to have the same hair, outfits, furniture and nails as celebrities. For acrylic nails, these trendy fauxs can cost hundreds of dollars to look like that of Kylie Jenner, Emma Chamberlain, Cardi B and Nicki Minaj.
Westport’s local nail salons (notably there are at least 15) include the popular Nail Luxe Nail. The average cost for acrylic nails at this salon is $75. This price is without the frequently purchased designs and colors or the price of getting acrylics removed, which can increase the final cost significantly to over one hundred dollars. This is simply too much money for faux nails.
Whether one desires these nails enough to spend at least $75 is a personal decision; however, the health risks involved in sporting these acrylic nails should be accounted for.
Acrylic nails are frequently purchased for how long they last, up to eight weeks according to Cosmopolitan. However, this is only due to the application of the nails involving radiation and dangerous chemicals. According to Beauty Harbor, damage to one’s nail bed and natural nails in addition to the risk of infection can occur, both of which can happen through acrylic nail application and removal. This can stunt one’s natural nail growth.
Taking a chance on these health risks and spending significant amounts of money is not worth it to have acrylic nails.