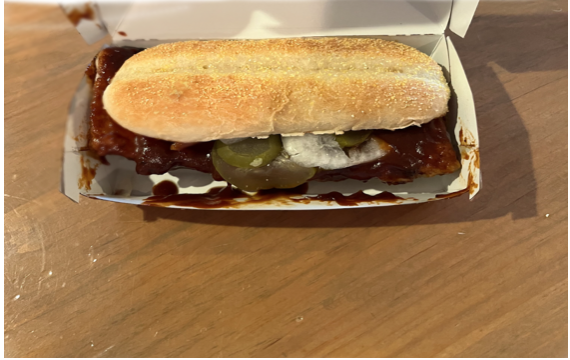 The Mcdonald’s McRib is not worthy of the hype. In my opinion, it is very different from what is advertised.

The McRib, one of McDonald’s most anticipated items, came back as of Monday Nov. 1. However, I don’t think that the McRib really lives up to its hyped up reputation.
The McRib, consisting of three pickles, four onion strips and a boneless patty shaped like a rib looked nothing similar to what the commercials showed. As I tasted the sandwich, I received a savory and satisfying taste, similar to the taste of a sloppy joe. The only difference was that in the McRib, the meat was solid instead of ground.

In 1981, when the product first came out, it was a unique alternative to the McDonalds classic family style burger and fries. Since its release, it has had an ongoing theme of being seasonal, usually coming back around November and leaving late December or early January.
I think that the rib could have had less sauce, more meat and more bread. Also, it shouldn’t have been called a rib as it was boneless meat. It was not really worthy of the rage or excitement, as it didn’t taste any better than a bacon quarter pounder.
But one aspect I did like about the sandwich was that it was cheap, costing only $3.69 or around $4 with tax. It was also a decent size.
Though my opinion on the sandwich was mixed, I honestly expected worse. But then, you get what you pay for. With the sandwich costing only $3.69, you can’t expect top quality.