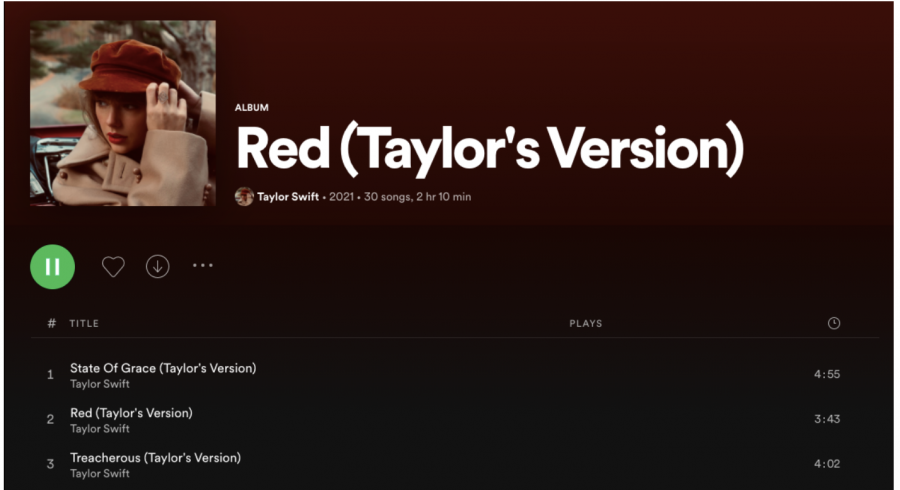 Taylor Swift released “Red (Taylor’s Version)” on Nov. 11 and it did not disappoint fans. The album contains the original 22 “Red” tracks, along with seven vaulted songs and a 10 minute version of “All Too Well”
Controversy struck with Taylor Swift’s producer in early 2021. He refused to give her the rights to the master tracks of her own music and in turn, she decided to re-record all of her albums one-by-one and add “Taylor’s Version” to the original title. Swift is able to do this because she owns the musical composition of the songs.
Swift is not making this change for money or power, but rather to spread awareness to other artists in the industry. She wants young artists to not make the same mistakes she did when she signed with agencies that limited her musical freedoms.
Swift released her first re-recorded album, “Fearless (Taylor’s Version),” in April 2021 and fans have been waiting for more albums to be re-recorded ever since.
Swift has been leaving clues in her social media posts for her fanbase of “Swifties” to uncover. Her clues are often linked to past music and relate to the album itself. For example, she announced the release of “Red (Taylor’s Version)” 22 weeks before the release date since one popular track is named “22.”

The original and new “Red” albums are similar, but have some differences as well. “Red (Taylor’s Version)” has the original 22 songs, but since the original album was released nine years ago, Taylor’s voice is more mature and produces a different sound.
“Red (Taylor’s Version)” also includes what Taylor calls “vaulted” songs. These are songs that Taylor wrote and recorded at the time of the original album, but they never made it into the album. She re-recorded the “vaulted” songs and released them with the “Taylor’s Version” title attached.
In addition to the 22 original songs and the seven vaulted songs, there is also a 10 minute version of the track “All Too Well.” This song is a fan favorite and Taylor decided to rework the beat and add in verses to create an extended version.
In addition to releasing the extended version of “All Too Well,” Swift directed a short film that followed the storyline of the extended version and starred Dylan O’Brien and Sadie Sink.
Many people and places began promoting “Red (Taylor’s Version)” prior to its release. The Empire State Building was lit red and the building’s Twitter account posted a photo and tagged Taylor Swift in the caption. Swift will also be appearing on “The Tonight Show” and “Late Night” to talk about the new re-recorded album.
The original “Red” album was released October 2012. After the release of the album, Taylor Swift went on tour putting on 86 shows. Fans are hoping she will soon be going on a tour with a mixed bag of all of her songs, but this is still unconfirmed.
One highlight of the album is “Nothing New,” which is one of her vaulted songs and features Phoebe Bridgers. The two artists produce similar music and fans have been waiting for them to collaborate for many years.
Even though “Nothing New” is a good song, my favorite song in “Red (Taylor’s Version)” would have to be ”State of Grace (Acoustic Version) (Taylor’s Version).” This song reminds me of Taylor’s original music and I think the lyrics are very empowering.
All in all, the album was exceptional and I am excited for more “Taylor’s Version” albums to come out.