‘Dune’ is the perfect book recreation, but fails to reach new audiences 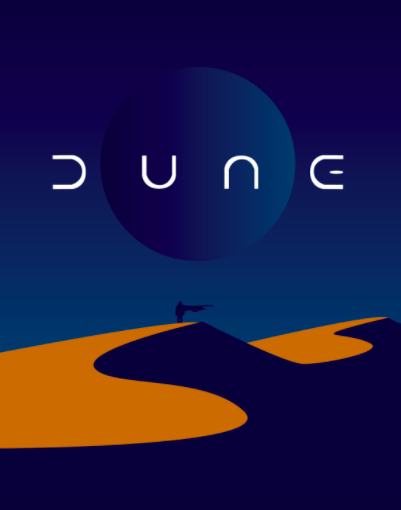 “Dune” 2021, starring Timothee Chalamet and Zendaya, is based on the 1965 sci-fi classic book. Taking place on an alien world with stunning cinematography, the movie succeeds at recreating the worldbuilding of the book.

“Dune,” 2021 came out on Oct. 22 onboth  HBO Max and in theaters. Based on the book “Dune,” published in 1965, the movie takes place in the distant future and follows the life of a royal family brought in to rule a desert planet. The planet is home to giant sand worms, ruthless native tribes and a universally sought-after drug, known only as “spice.”

As a fan of the “Dune” books myself, as well as a witness of the previously embarrassing attempts at a movie recreation of them, I had high expectations for such a big budget movie with an all-star cast and such promising trailers.

And I wasn’t disappointed.

“Dune” performed solidly at the box office, earning over $40 million in its opening weekend. But that’s to be expected when you have megastar actors/teenage crushes Timothee Chalamet and Zendaya in the cast.

But there is a tragic flaw with this movie: This recreation of the book may not be what audiences wanted.

As I watched this movie with my teenage friends, it was clear that their expectations for the film had not been met.

“Zendaya was only in it for like five seconds,” one person complained.  “Nothing even happened,”another whined.

Neither were unworthy criticisms.

It is true that Zendaya, despite appearing heavily in ad campaigns and interviews, comprised a mostly wordless-role of staring at the camera mysteriously. It is hard to watch the film and not feel misled.

And as for the lack of developed plot? Well, I can understand why anyone who was unfamiliar with the books would find the plot underdeveloped.  This is because ”Dune” only covered the first half of the actual book (and also did not touch upon  the five other books in the series and countless prequels and spinoffs).

Director Denis Villeneuve, who also directed moody sci-fi classic “Blade Runner 2049,” was a fanboy of the books when he read them at 15, and has dedicated himself to an accurate portrayal. And he certainly hasn’t failed; if there’s one thing that can be said above all about “Dune,” it’s how downright immersive the entire experience was.

Monstrous sets, moody lighting, desert wind and the billowing soundtrack throw you into the movie as you feel every scene beat by beat, pulling you in. It felt like every scene had been pulled straight from a storyboard or concept art. Seriously, pause at any point in the movie, slap on “Dune 2021” in big letters, and you’ll have a poster-worthy piece of art. “Dune” is, undoubtedly, one of the most original, genre-pushing movies I’ve ever seen.

Villneuev recreated “Dune” on the scale and budget that fans of the book know it deserves. But the puzzling plot, whispered exposition, slow pacing and zero resolution unfortunately made this movie off-putting to audiences who’ve never read the book.

Painstaking detail was put into creating the world that readers of the book would recognize and love. Often we complain about movies butchering the original book they were based off of, and this is the perfect example of something swung precariously into the exact opposite direction.

As a fan of the books, I can only hope that audiences turn out for the sequel, which Disney will start filming in July 2022. The second film should see the conclusion of book one, which will have a more substantial plot and resolution for the viewers who don’t already know how it all ends. Ultimately, “Dune” has lived up to and surpassed expectations of fans, the only question left is whether new audiences will be left astounded or annoyed as they leave the theater.