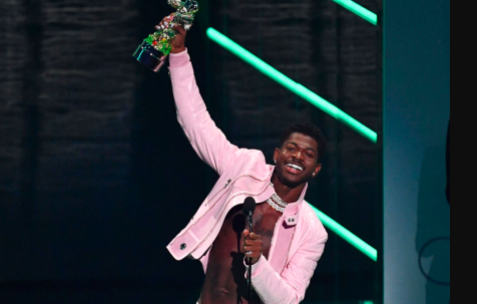 Lil Nas X accepted VMA awards for both best video and direction for his song Montero (Call Me By Your Name).

After almost two years of total chaos, returning to beloved traditions in a safe manner is the best way to bring back our normal lives. In an attempt to save the beloved event last year, the Video Music Awards were thrown together in the midst of the pandemic, featuring pre-recorded performances and outdoor shots. This year, however, the award show returned to its pre-COVID roots and was held at Barclays Center in New York, featuring live performances.

Even with a fully masked audience, the award show still managed to feel like old times as many returning artists took the stage, including Justin Bieber, Ed Sheeran and Camilla Cabello. Additionally, many VMAs newcomers performed, like Olivia Rodrigo, who captured the audience’s attention with her performance of her number one hit, “Good 4 U.”

Although the award show had a record low of viewers, the social media buzz that occurred after the show made up for the lack of an online audience. This year’s show was an entertaining, fun and uplifting change to such stressful times. An abundance of celebrities including Avril Lavigne, Kid Laroi, Paris Hilton, Doja Cat and many more all attended the VMAs. Seeing red carpet photos of celebrities circulate on social media was definitely a reminder of the way things used to be.

In addition, the award show was a great way to recognize artists for their hard work. In such trying times, the absence of normal award shows has definitely been strange considering so many fans look forward to tuning in to watch their favorite celebrities. And, voting on VMA awards has always made the show so much more interactive with viewers at home. This year, artists such as Justin Bieber, Olivia Rodrigo, BTS, Doja Cat, Travis Scott, etc, were all recognized by the fans for their talents and received VMA awards in various categories.

Overall, I think that the VMAs were definitely worth the watch. As a highschool student who has a tradition of watching the VMAs from her living room with her family, I was pleasantly surprised with this year’s attempt at the VMAs. I loved getting to watch all of the celebrities enter in their captivating looks onto the red carpet, see some of my favorite artists perform and make predictions on who would take home each award. Award shows have always been such a huge part of American culture so the recent revival of the VMAs and other events, such as the Met Gala, has provided a new wave of normalcy.