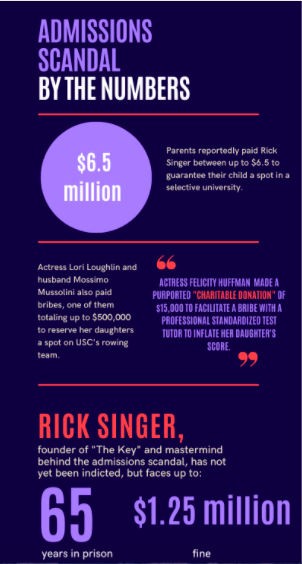 While the severity of the college admissions scandal came to light in 2019, 33 parents were accused of bribing “The Key” owner Rick Singer more than $25 million to reserve spots for their children in highly selective universities. Singer has yet to be indicted since the trial.

Before Netflix removed the eminent series “Gossip Girl” in the wake of 2021, I spent a good portion of quarantine binge-watching beautifully dressed, elite teenagers stressing over SATs and college admissions. I distinctly remember an episode in which the mom of a side character scorned prestigious universities, firmly believing that “knowledge is not for sale.” In an unexpected crossover, Netflix’s documentary “Operation Varsity Blues: The College Admissions Scandal,” which was released on March 17, brought me right back to that line, affirming that there is in fact a colossal price tag on higher education.

Netflix presents the documentary as a horror film, perhaps alluding to the horror that is the dissolution of ethics in the college admissions process. William “Rick” Singer is initially depicted as a normal guy carrying out an everyday routine–taking out the trash, drinking coffee, conversing with clients over the phone–with the caveat that he is a con artist.

Through his company “The Key,” Singer garnered millions of dollars from America’s richest families to secure their children unearned spots in Ivy League and other highly selective universities.

The documentary centers around his life and once-profitable business; however, producers refrain from humanizing Singer, instead portraying his racketeering as a lucrative yet felonious scam. Ominous music, dramatic cuts from his home to unsavory business ventures and daunting clips of FBI-recepted phone calls paint him as a wanted criminal, creating the illusion that viewers are guilty accomplices.

Between clips of Singer’s maleficence, the documentary cleverly presents the perspective of high-profile celebrities–Lori Loughlin and Felicity Huffman among the most prominent–involved in the admissions scandal. The concerned expressions and anxious rants of uncanny look-alike actors convincingly portray a desperate parent awaiting an acceptance letter, so apprehensive of the process that they resort to illegal means.

All conversations between Singer and his clients are real, with occasional edits for clarity or brevity. Nervous quips about their children’s unsatisfactory test scores, subpar athletic ability and thin list of extracurriculars feel authentic, as though the consultation occurred with an average parent of an upperclassmen rather than a famous celebrity.

While the phone calls feel eerily normal, the lengths to which these parents went to appeal to prestigious universities is far from relatable. Shots of a bemused teenager posing in a three-foot wade pool to fabricate water polo pictures, along with clips of a professional tutor revising a student’s ACT, capture the scandal’s egregiousness yet effective subtlety.

Amidst celebrities exploiting college admissions in the comfort of their mansions through Singer’s “side door” approach, the producers are conscious to include the perspectives of normal teenagers attempting to apply ethically.

For every senior celebrating an acceptance to their dream school, there are at least three shown sobbing, regretting their ineffectual course load and stressing over impending rejections. The documentary highlights the rigor and deceit involved in the admissions process both for public figures willing to pay for a guaranteed spot, and to the thousands of others trying to approach the system fairly.

“Operation Varsity Blues” is an enticing production that perfectly incorporates an informative documentary with investigative reporting and dramatic undertones. The suspenseful tone and variety of perspectives, ranging from high-profile millionaires to distressed teenagers, encapsulates not only the gravity of Singer’s scandal, but also the misguided pressure placed on college admissions throughout the country.