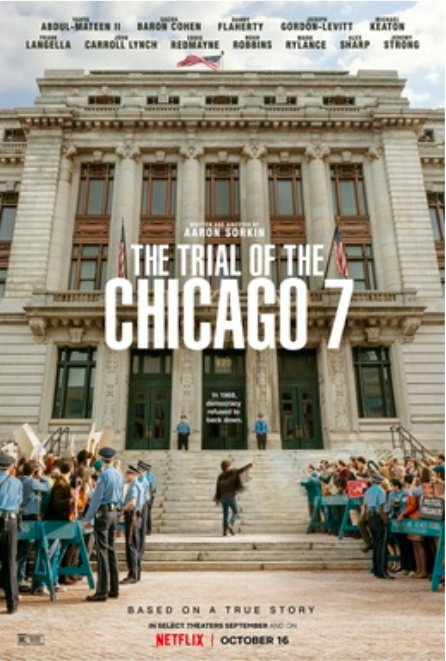 The official release poster for the film “Trial of the Chicago 7,” a courtroom drama that was critically acclaimed.

The pandemic may have prevented people from actually seeing the films in theatres, but the reviewers on Rotten Tomatoes are singing their praises nevertheless, and viewers should trust the ratings.

The Academy Award Best Picture nominations are “The Father,” “Judas and the Black Messiah,” “Mank,” “Minari,” “Nomadland,” “Promising Young Woman,” “Sound of Metal” and “Trial of the Chicago 7.”

I have not seen all of the movies that were nominated for Best Picture, but I have seen “Trial of the Chicago 7,” “Mank,” “Da 5 Bloods” and “Ma Rainey’s Black Bottom.” The Rotten Tomatoes reviews on the movies I have seen are spot-on, and the movies are as good as they sound. As for the ones I haven’t seen, I would trust the reviewers on Rotten Tomatoes.

The actors nominated for a leading role were Chadwick Boseman for “Da 5 bloods,” Riz Ahmed for “Sound of Metal,” Anthony Hopkins for “The Father,” Gary Oldman for “Mank” and Steven Yeun for “Minari.”

I believe the Academy made a mistake in not nominating that actor Delroy Lindo, in “Da 5 Bloods”, should have been nominated for Best Actor, as his performance as a rattled war veteran with PTSD who goes insane was astonishing.

Gary Oldman gave an amazing performance as Herman Mankiewicz in “Mank,” and I believe that his performance tops those given by Delroy Lindo in “Da 5 Bloods” and Eddie Redmayne in “Trial of the Chicago 7.”

Actresses nominated for Best Actress in a Leading Role are Viola Davis for “Ma Rainey’s Black Bottom,” Andra Day for “The United States vs. Billie Holiday,” Vanessa Kirby for “Pieces of a Woman,” France McDormand for “Nomadland” and Carey Mulligan for “Promising Young Woman.” I’ve only seen “Ma Rainey’s Black Bottom,” and I think that Viola Davis deserves an Academy Award for it.

Of the people nominated for Best Actor in a Supporting Role, I haven’t seen any of the movies that were nominated except for “Trial of the Chicago 7,” and I know that Sacha Baron Cohen shouldn’t get an Academy Award because even though Cohen was good, he has given better performances in other movies like “Borat.”

Amanda Seyfried, who was nominated for Best Actress in a Supporting Role for “Mank,” also shouldn’t get an Academy Award because Seyfried didn’t give her best performance. She has been better in movies like “Ted 2” and “Jennifer’s Body.”

In short, the movies that are the most deserving of an Academy Award are “Mank” for Best Picture, Gary Oldman for Best Actor, Viola Davis for Best Actress, Olivia Coleman for Best Supporting Actress, David Fincher for Best Director and Aaron Sorkin for Best Original Screenplay for “Trial of the Chicago 7.”