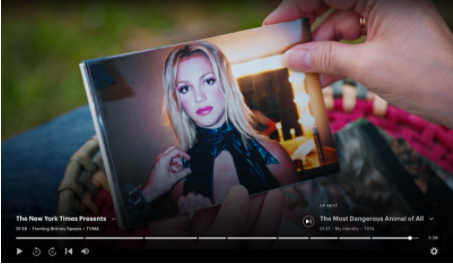 The New York Times Presents released an episode on Feb. 5, 2020 called “Framing Britney Spears” on Hulu, about the behind the scenes of her life and the legality battle in her 12 years conservatorship with her father, Jamie Spears.

Pop star Britney Spears sparked concern in her fans over the past years because of her ongoing conservatorship with her father. Her father, Jamie Spears, has been in control of her finances and important work-related decisions for the past 12 years.

The “New York Times Presents” has dedicated an episode to this controversial topic titled “Framing Britney Spears,”, and it can be viewed on Hulu. It goes behind the scenes with the people involved in her conservatorship to understand everything that has led up to the present day fight for Spears’ freedom.

While this episode of “The New York Time Presents” is unauthorized by Britney Spears, it still includes several interviews with people who knew her personally, such as her previous attorneys, former assistant and brother. These interviews with people so close to her made the episode incredibly interesting to watch.

Typically, a conservatorship is for elderly people who suffer from brain injuries and can no longer make decisions for themselves. On Jan. 31, 2008, Spears was taken to the hospital for the second time that month. Her father, Jamie Spears then filed for a temporary conservatorship over Britney Spears. There is speculation that she could have been battling with mental issues or drug abuse issues, which the conservatorship intended to help her with. However, it was strange that her father, who was never involved in her life previously, now wanted to have control over everything in her life.

“If I wasn’t under the restraints that I’m under right now, you know, with all the lawyers and doctors and people analyzing me everyday and all that kind of stuff, like if that wasn’t there, I’d feel so liberated and feel like myself,” Spears said in one of the clips from an unreleased documentary about her and the conservatorship.

People began to read into Spears’ Instagram posts, trying to decode her caption and pictures posted, wondering if she was crying for help. She was capable of performing and putting on shows, yet her father still had complete control over her finances. Spears then unexpectedly canceled her Las Vegas residency due to her father’s health issues. Some fans called this the “Britney shut down” as she went silent on all social media.

Thus, the “Free Britney”  movement began. The public began making t-shirts and posters, protesting in the streets, bringing attention to the unjust conservatorship. In August of 2020, Spears publically signaled that she wanted to challenge her conservatorship.

After Spears went to court, it was confirmed that Britney Spears had lost her case to her father, and Jamie Spears will not be suspended from her finances. He still remains her conservator because he claims that he has helped Spears tremendously and wants the best for her. Britney Spears and her mother, Lynne Spears, continue to fight for her rights, and for an alternative manager of her finances rather than her father.

With albums winning platinum 14 times and music videos with over 500 million views, Britney Spears remains one of the most famous pop music artists. “Framing Britney Spears” highlights her continued battle for her freedom in the conservatorship, and her fans remain dedicated to making awareness of her unjust situation. This episode effectively educated its audience in an engaging way and spread awareness about a relevant topic. This episode from “The New York Times Presents” will help reach a larger audience about Spears’ suspicious conservatorship, which in the end will help her case, by having more people on her side and speaking out for her since she is incapable in the conservatorship.